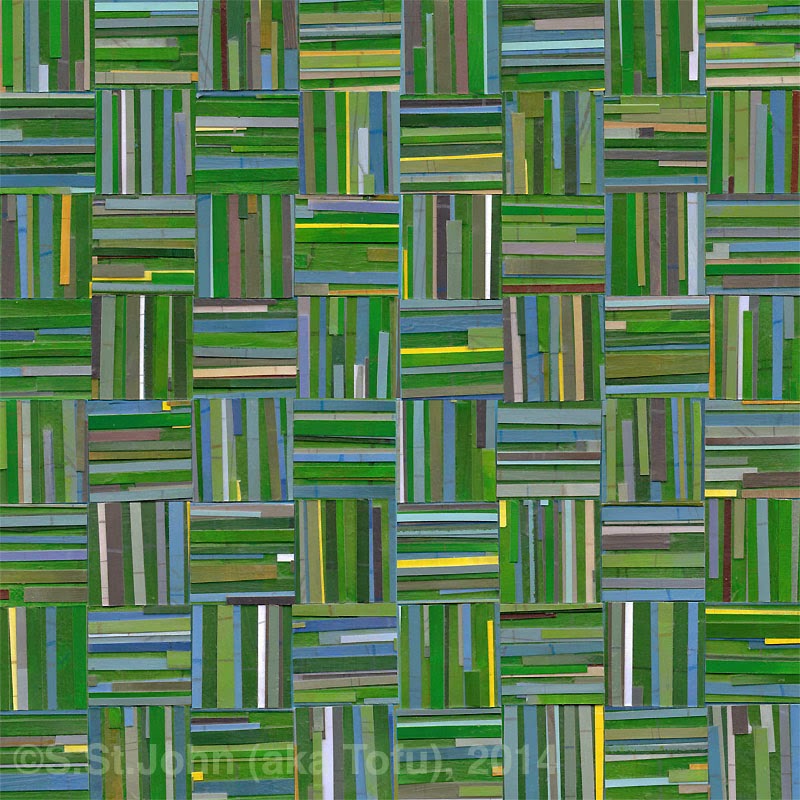 It seems every time a friend returns from a visit to Washington or Oregon they always pretty much say the same thing, “It’s so green up there.”  Up in the Pacific Northwest they seem to take the green for granted – well at least west of the Cascades.  And you know, it really is green up there.  Even California’s wettest winters and greenest springs are different from the green up north.  The dense lush grass on every roadside, the skies that quickly go from blue to lead gray, the muted light – it is striking how a place that is not that far away can be so different.

I wanted to capture some of that green for the Collagescape Series.  I chose one of my favorite places in the Pacific Northwest — the Columbia River Gorge just east of Portland.  It’s one of those over-the-top landscapes that the Western United States does so well.  But unlike the arid West, up north it’s green, so many shades of green with occasional break of a tall, narrow waterfall and the blue flow of the river itself.

This is another work to be included in my Collagescape show opening in August.  In the meantime, prints and additional items with this image are also available from Society 6. 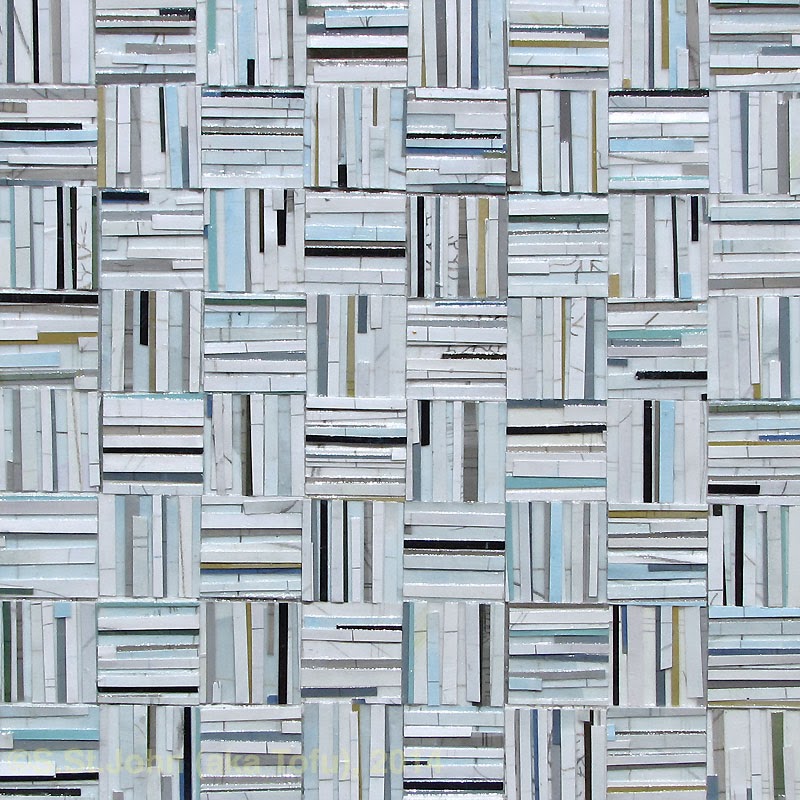 I’ve been a San Franciscan for more than 20 years, but there’s snow in my past – a lot of snow.  Life started in Buffalo, and then Cape Cod with stints in Boston, Illinois and the snowiest city in Switzerland.  Suffice to say; I know snow.  Now my life is different and virtually snow free.  Snow is something I see when driving over a mountain pass.   Recently, it was a morning drive over the mountains into Death Valley.  Snow on the sagebrush – very pretty – look out the window and just turn up the car’s heat.

I’ve had a long fascination with snow in painting.  I saw the Impressionists in Winter: Effets de Neige show that came through San Francisco in 1999 four times.  I still find it remarkable how one could start feeling cold just by looking at a painting.  Painting snow can be intimidating, but I wanted to capture it for the Collagescape Series.

Cape Cod has many winters with little or no snow, but every once in a while there is a “real” winter like the one that is happening this year. I sought to capture the various shades of white and shadow on the snow.  The bright whites after the sun comes out as well as the blues and grays.  Snow mixed with glimpses of bare branches, golden beach and marsh grass, the gray of weathered cedar shingles and snow fences.  Fences that usually attempt to hold dunes in place instead of snowdrifts.  After I finished the piece I realized the grid pattern I used added more unintended Cape Cod references.  For example, the pattern is a nod to the shingles and picket fences as well as the small windowpanes so common on Cape Cod houses.

The snow will have long since melted when this piece is included in my Collagescape show opening in August.
Posted by Tofu at 12:54 PM 1 comment: 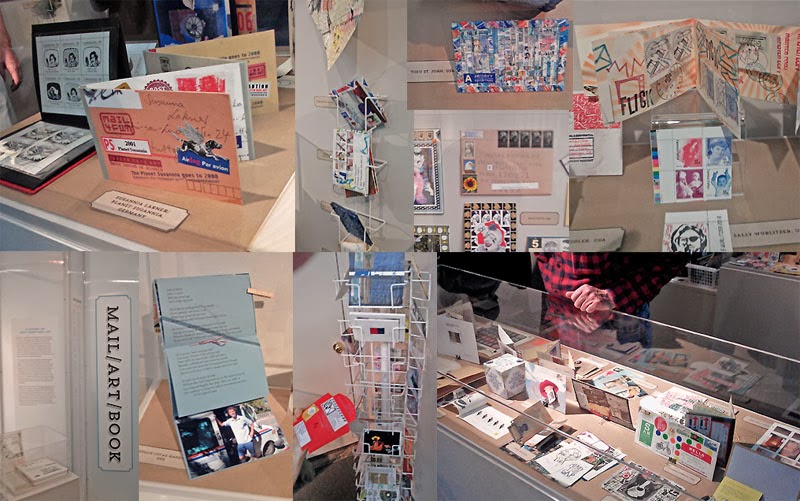 Last night was the opening of Mail/Art/Book at the San Francisco Center for the Book.  It’s a truly global exhibit with art from all over the world.  All of the art arrived via the mail to curators Jennie Hinchliff and John Held, Jr.  The opening was packed and I saw familiar faces and plenty of mail art from different artists who I correspondence with.  I wasn’t surprised to see Susanna Lakner had sent went one of her groovy little hand made books all the way from Germany (see above).  Phyllis Lucas-Haddon sent in a delightful tribute to her letter carrier (see above).  The show runs until April 27, 2014.  And look closely and you also will see a piece I sent through the mail (see below) in one of the display cases. 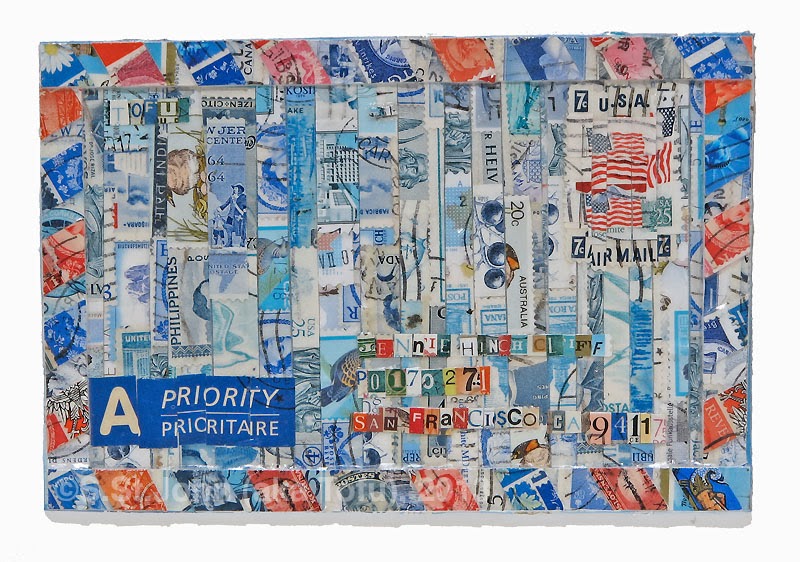 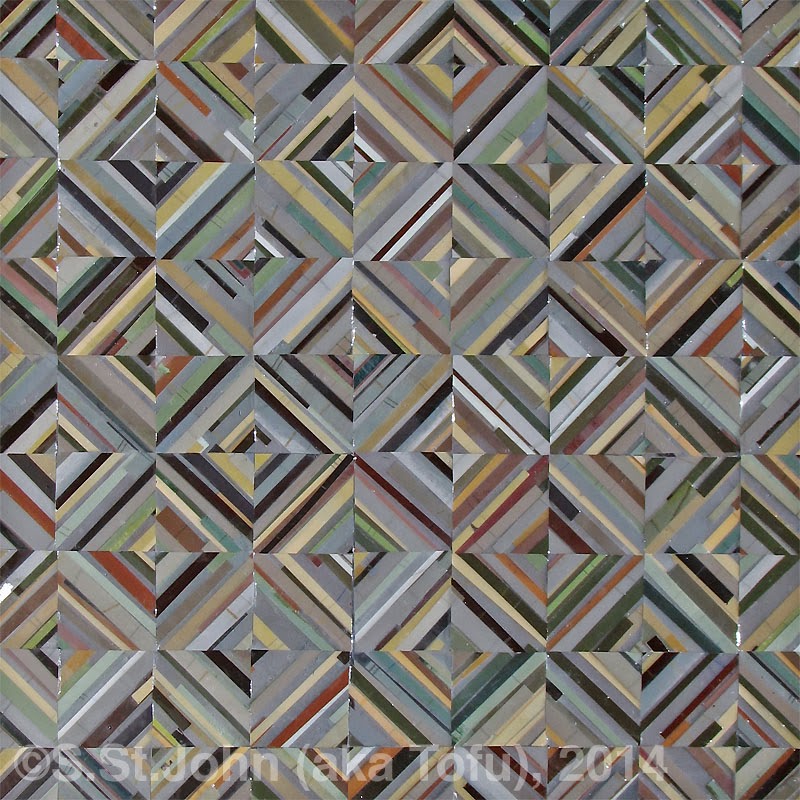 
There is a plenty of painting, cutting and gluing happening these days in San Francisco.  All in preparation for my Collagescape show opening in August.  I did have time for a quick and inspirational trip to the other side of the Sierra.  My mom and I spent a wintery afternoon in the Alabama Hills near Lone Pine, California.

Here is the latest piece, this one inspired by those big gray rocks.  The grays are really quite complicated and full of hundreds of shades of browns, blues, reds, golds, etc.  Mix in the dry grass and sagebrush with looming, snow-covered Mount Whitney, and you have it.

If you haven’t seen the Alabama Hills in person, you most likely have seen them on film.  Since the 1950’s the Alabama Hills have been the filming location for over 150 movies (mostly westerns) and numerous television shows and commercials.  It wasn’t planned, but the grays in this collagescape also resulted in a bit of silver tone palette – an appropriate homage to the many old movies shot up in the hills.
Posted by Tofu at 2:16 PM No comments: 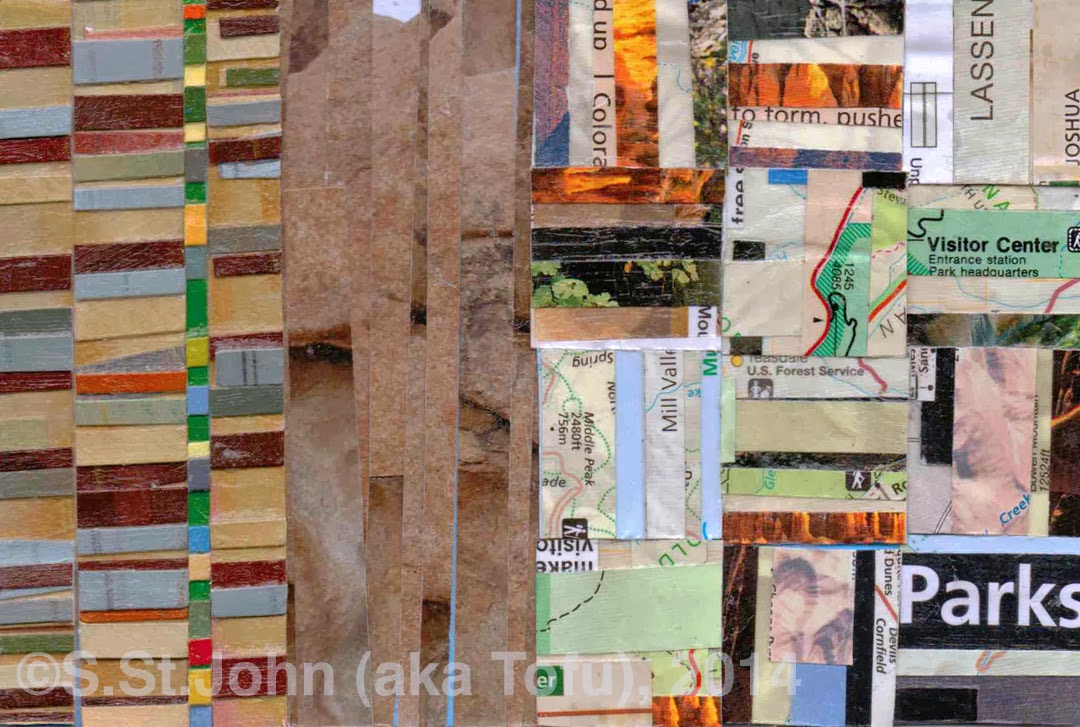 Answering a mail art call where the theme is inspiration – it took me moments to realize I needed to do another national parks piece.  America’s national parks have been a constant source of inspiration for my art, in particular the desert parks.  Just last week I have a glorious day out in Death Valley.  This piece is off to France for a show this spring.
Posted by Tofu at 3:00 PM No comments: 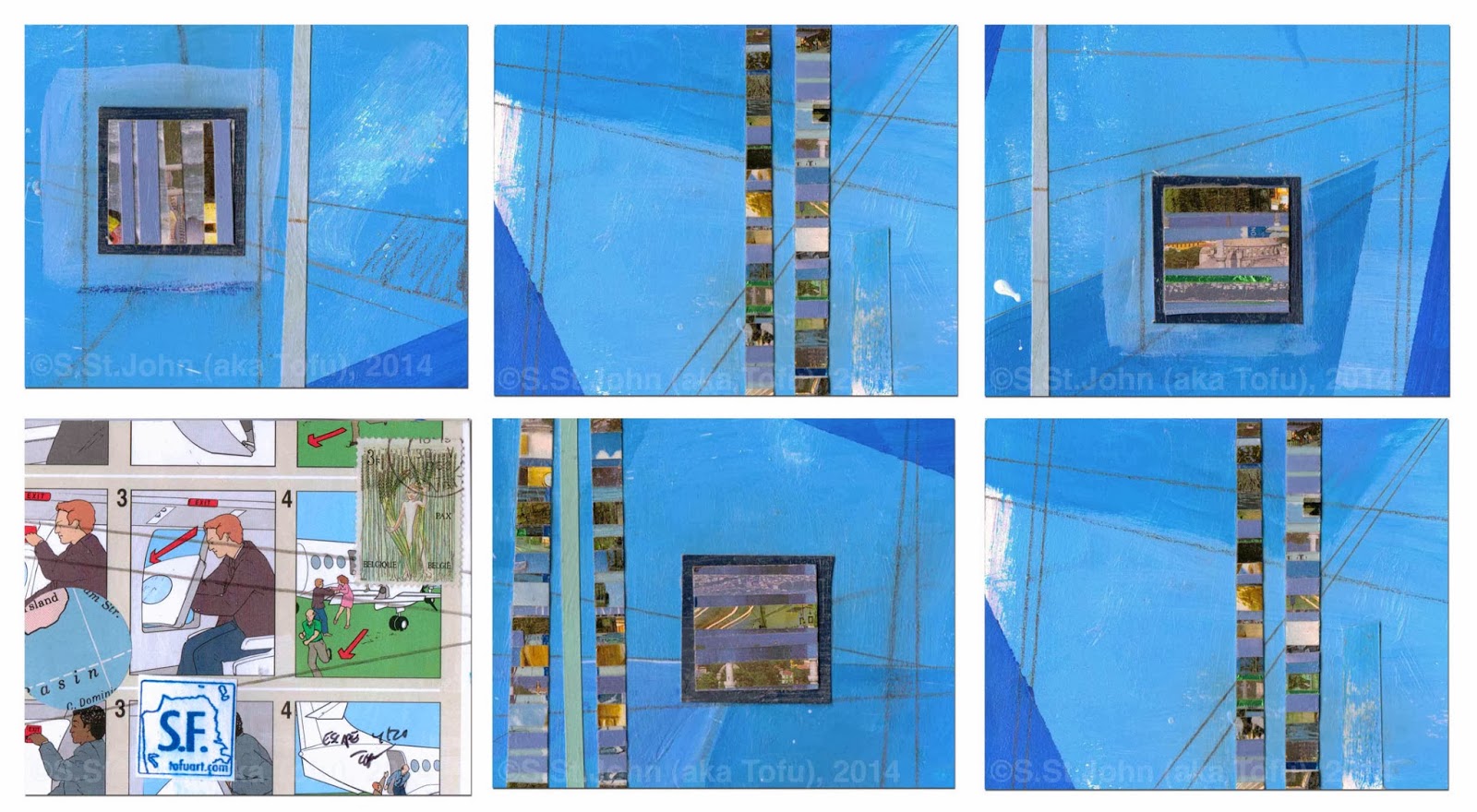 The rains back, staying inside and it’s time for a new series (20 pieces) of mail art.  This is the Escape Series, done on the backsides of recycled airline safety cards – many from now-defunct airlines.  It’s all about escaping the cold, the winter, or just plain (or plane) getting away.  Receiving a piece of exotic mail in your mailbox might be the next best thing to traveling somewhere exotic yourself.
Posted by Tofu at 11:00 AM No comments: 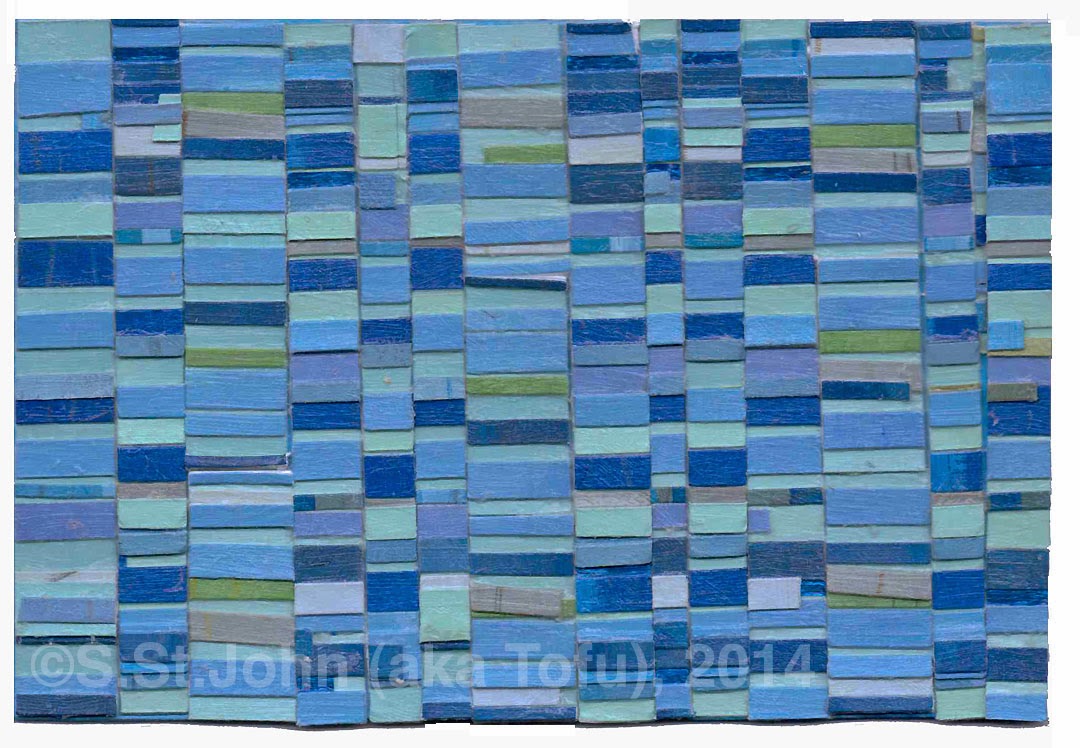 A water prototype piece for the Collagescape Series, this little one (4"x6") is being mailed off to Istanbul for a mail art show where theme is, wait for it….   Water!
Posted by Tofu at 1:39 PM No comments: