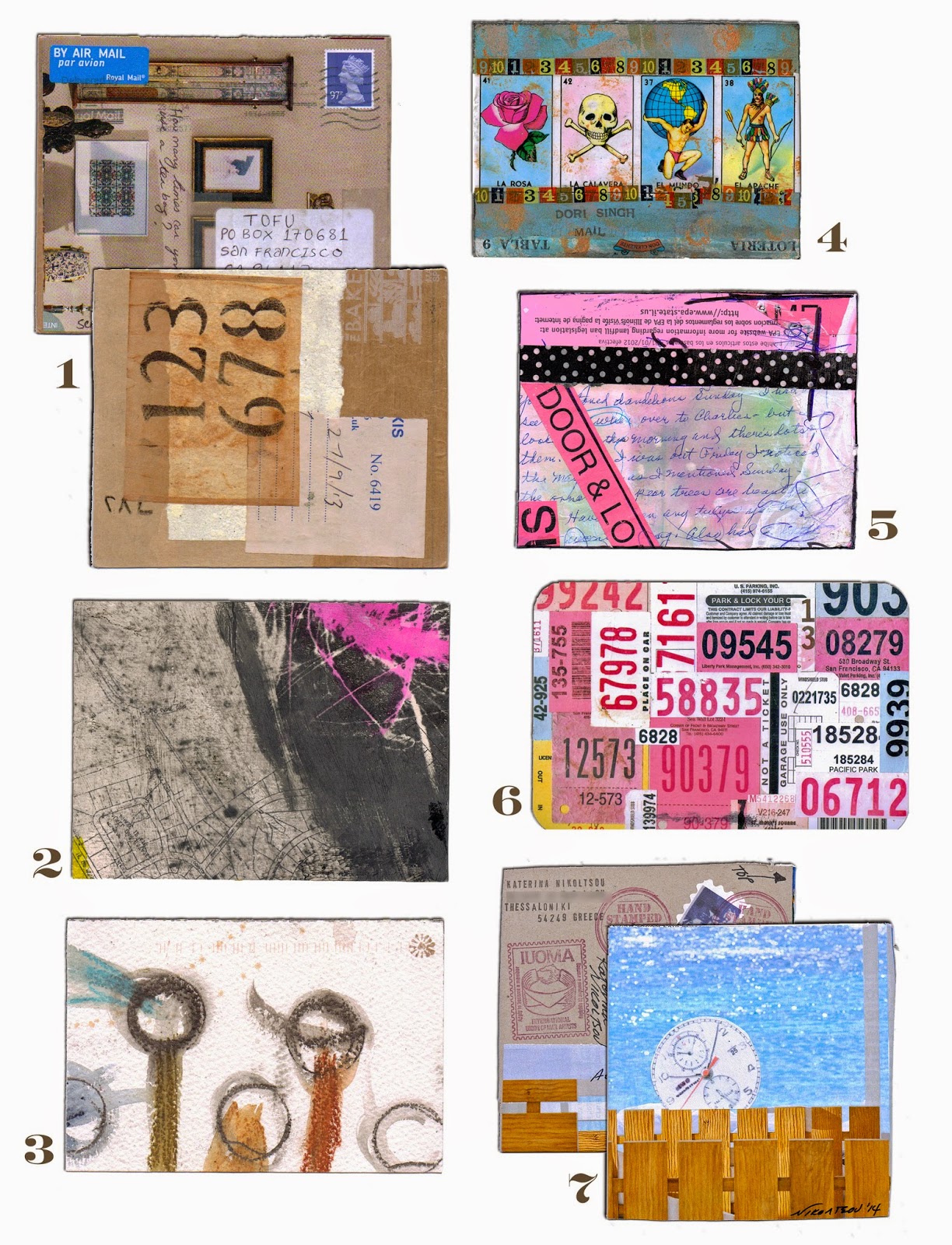 It’s the end of August in San Francisco and summer is finally here, (we tend to do that season in September and October). Visitors continue to stream into Glama Rama to see the show and all the while I am busy sending out some new mail art.  The PO Box is filling with fun things too, including these pieces (shown above):


Thanks for all the cool mail – time to send out more soon….
Posted by Tofu at 10:00 AM No comments:

Layers of time at Letchworth 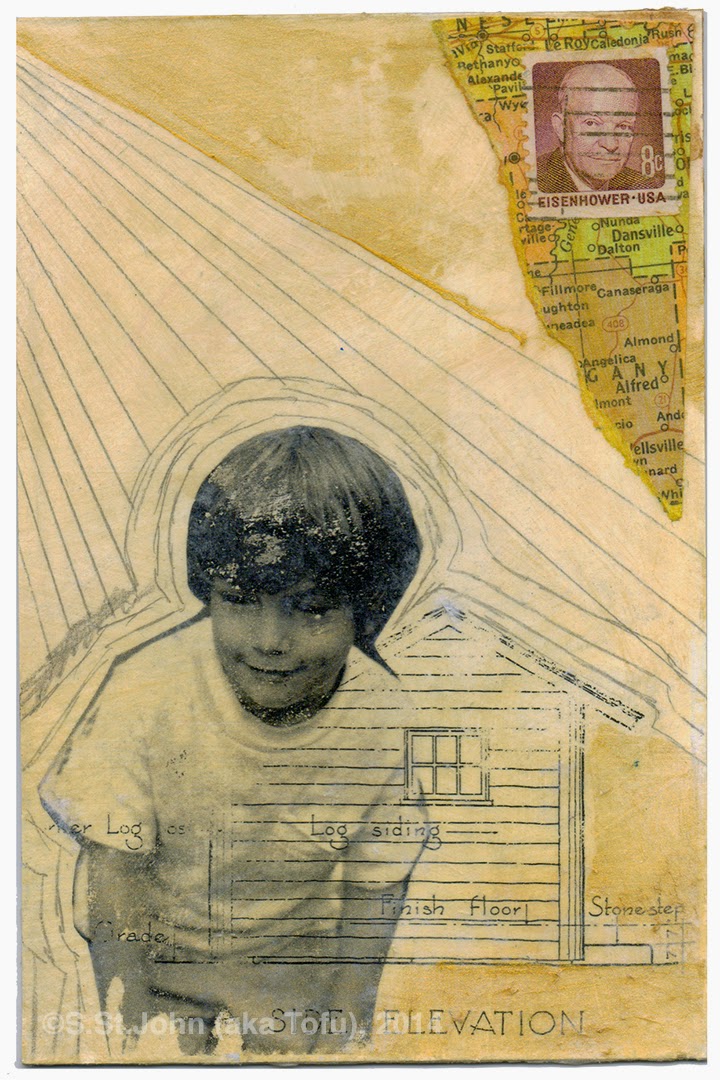 Lost Letchworth Postcard, 4”x6” mixed media on board
Imagine a postcard lost in time since the 1970’s and finally arriving in your mailbox in the 21st Century.  Okay, that’s an exaggeration.  But I am experimenting with image transfers and used a copy of a photo of my brother in Western New York’s Letchworth State Park.  We always stayed in Area C where we rented a cabin.  The same cabins that were built by our grandfather’s Civilian Conservation Corps crew during the 1930’s.  There are a lot of layers of material and time in this little piece.
Posted by Tofu at 5:47 PM No comments:

Trouble at the Lake 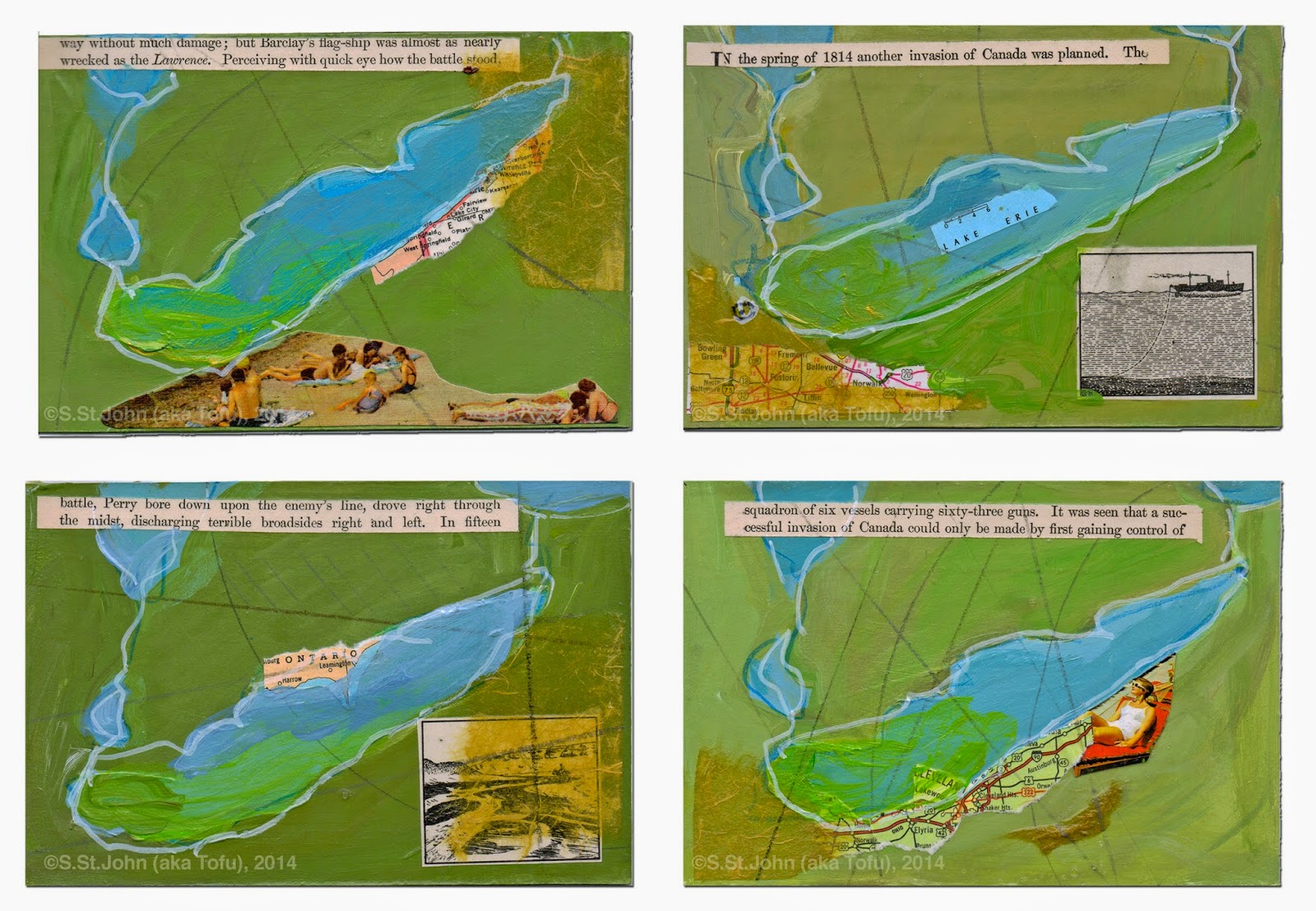 From series titled Trouble at the Lake, mixed media on matter board, 4”x6” each

Lake Erie has played a big role in my life.  It’s the lake that is surrounded by once-prosperous, industrial cities.  It drew my ancestors like a magnet.  As an infant, I lived in an apartment building in Buffalo, right on the shore of the lake.  I continued to live nearby for my first 14 years.  When winter, arctic air blasted across Lake Erie it was the source of amazing snowstorms, and it was the place of summer of beaches as well.  Back then the lake was terribly polluted, but the EPA and Clean Water Act helped turn things around.  Next, the demise of America’s heavy industry was a blessing for Lake Erie’s waters.  But the disappearance of industry nearly killed the cities and towns surrounding the lake when jobs vanished.   The factories were closed down rather than upgraded.  Then, many of the remaining jobs were shipped overseas leaving workers adrift.

Lake Erie, and the working families who live on it shores, have been victims of unbridled capitalism. The same forces that have nearly destroyed the lake’s waters and its great cities, is now shutting off the water for poor people in Detroit.  And, this month, the people of Toledo were not able to drink or use the water due to a toxic algae bloom.  The algae bloom is a phenomenon linked to global warming and agribusiness.

Lake Erie and a city like Toledo might seem faraway to many Americans, but the lake could be called the United States’ Canary in the Coal Mine — or we could say Perch in the Lake.  The health of Lake Erie, and the quality of life of the communities that surrounded the lake, reflect the overall health of our entire country.

This series of 25 pieces of 4”x6” handmade postcards is being mailed to some of the artists I exchange mail art with.
Posted by Tofu at 1:00 PM 1 comment:

It’s been a hectic summer having opened a large show last week.  I haven’t been able to check the PO Box for about two weeks – I finally got up there today and was not disappointed.  All sorts of notes, cards and mail art treasures were waiting for me.  A big thank you to everyone who sent them out.  It’s time for me to make some mail art and start responding.  In the meantime, here a re a few favorites: 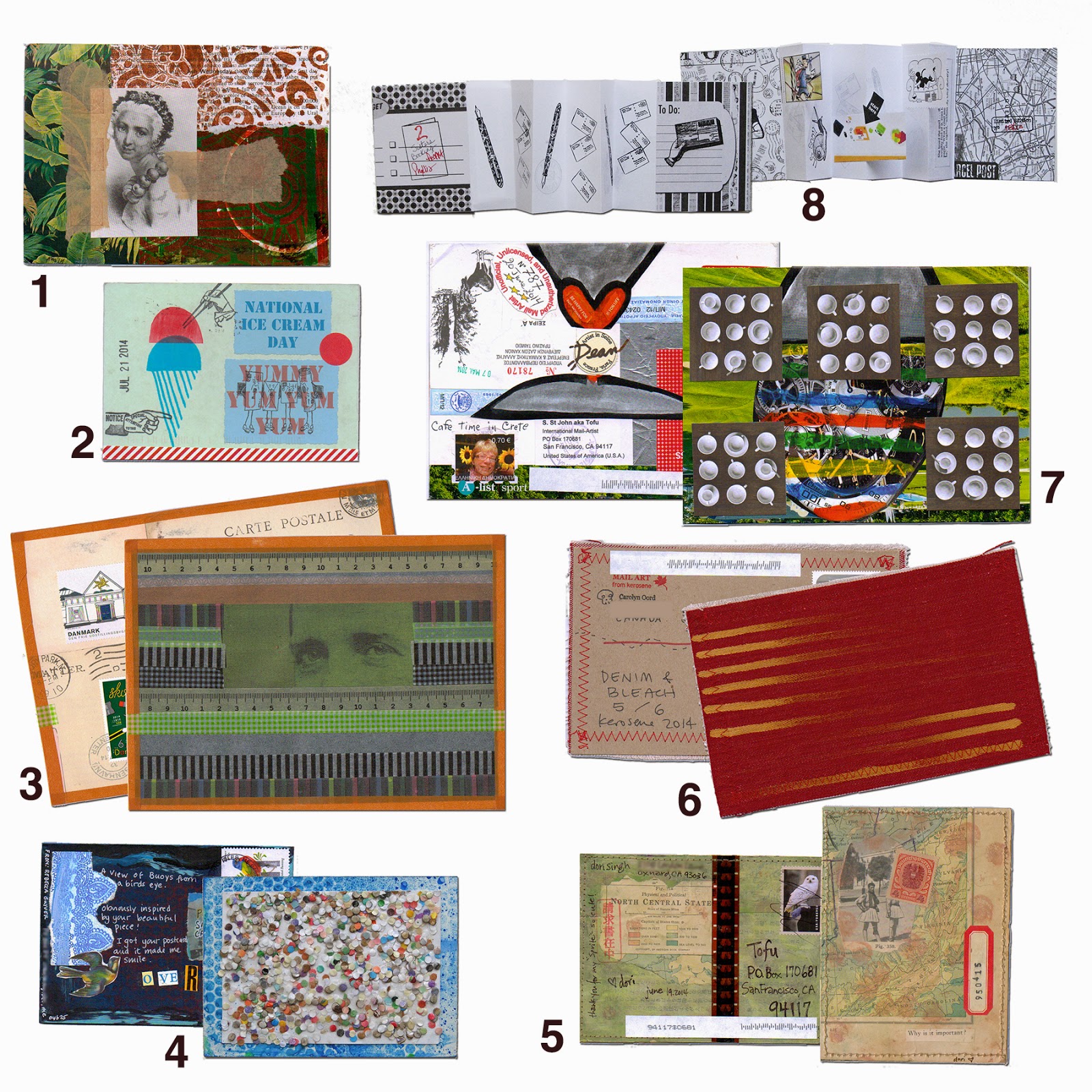 The Opening for Collage + Landscape = Collagescape 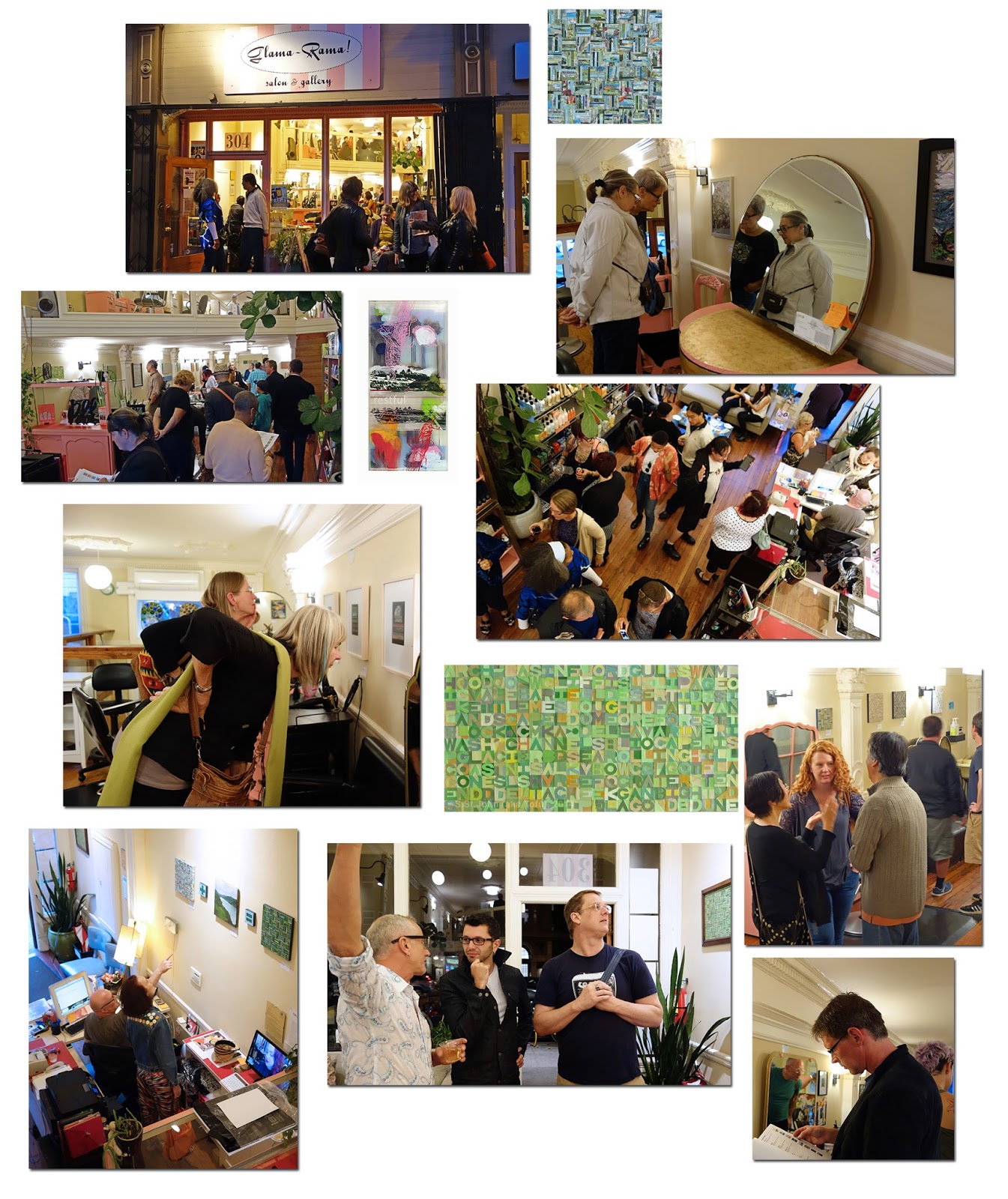 A few photos from last night’s opening for Collage + Landscape = Collagescape - the show is up until September 28, 2014. Details here.
Posted by Tofu at 1:17 PM No comments: