It started with a box in a basement...

A forgotten box full of old travel brochures, maps and postcards, etc. + an old photo = more than 30 pieces of new work.  The story is revealed on September 16 when Imagining Val Travel opens (click here for details).
Posted by Tofu at 4:41 PM No comments: 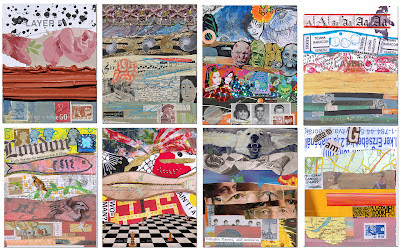 Now that the Millennia Mail Art Project is underway, it seems every time I head to the Upper Haight to check on the P.O. Box I find another completed piece has returned.  Above are the most recent cards to make it back to San Francisco.

You can see all the completed pieces at tofuart.com with details and links to the participating artists.
Posted by Tofu at 8:21 PM No comments:

Deep in the Heart of Texas 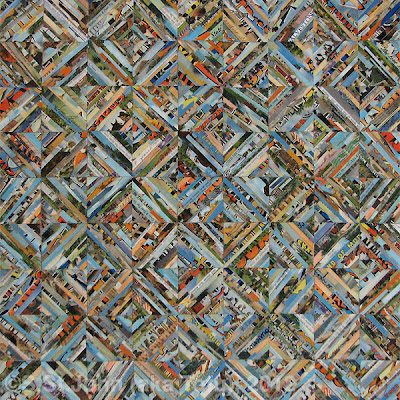 This is what happens when you have a stack of vintage postcards and postcard booklets from the 1940’s.  All from Texas, from El Paso to Corpus Christi, Amarillo to Galveston, there’s cowboys and cowgirls and, look closely, a few longhorn cattle.

Prints and other goodies based on this piece are available from Society 6.
Posted by Tofu at 1:05 PM No comments: 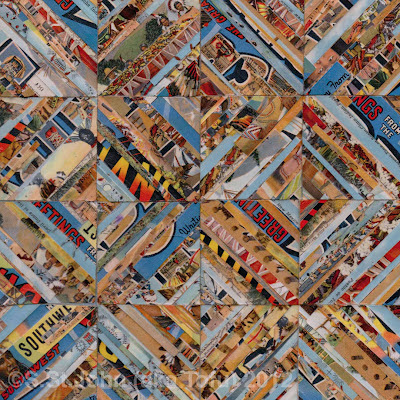 My work tends to be both labor and time intensive.  I always like to start small and experiment first before committing to larger pieces.  I feel yesterday’s experiment with vintage postcards of American Indians was a big success.  Stay tuned, bigger versions on this idea will be coming…

You can also get prints and other goodies with this image from Society 6.
Posted by Tofu at 1:44 PM No comments: 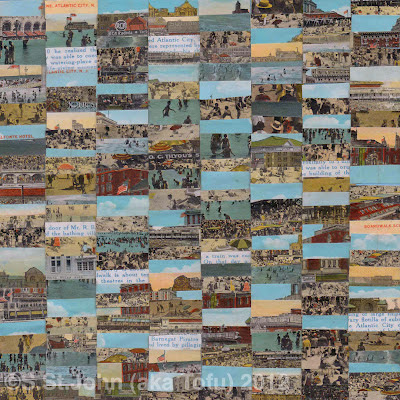 Atlantic City has been done over a number of times over the years.  Most famously, or notoriously, in the 1970’s when much was torn down to create a bit of Las Vegas on the Atlantic.  It’s a shame that it has always been about renovation instead of restoration.  Imagine if we had waited and now, a century later, Atlantic City’s Boardwalk was meticulously restored to its early 20th Century splendor.  All we have now is old photos and postcards. The postcards used for this piece were nearly a hundred years old.  Come on down to the Boardwalk, jump in the sea, get some saltwater taffy and imagine the days when Nucky Johnson ruled the town.
Posted by Tofu at 11:53 AM No comments:

Oh the amazing things I get in the mail

It started quite innocently for me.  Back in December 2010 I did a piece of art that I mailed in 62 separate parts as the year ended.  As 2011 was winding down, I decided to ask for postcards to use in the first piece of 2012.  That’s when it started to get out of control – in a very good way.

I continue to get the coolest things in my mailbox.  Below are some of the recent arrivals.

Two Cards from Jennie Hinchliff at Red Letter Day and one from Carroll (aka dumpsterdiersanonymous on flickr.)

Eni Ilis sent me a couple of slightly enigmatic and groovy pieces of Brazilian mail art.

David Stanley Aponte tried to send me something from Berlin.  It arrived in a tidy plastic bag from the good people at Deutsche Post – Die Sendung wurde leider beschädigt – indeed!  A handmade card from a band named Trick Sensei came from Portland in much better condition.

In some cases the envelopes are as cool as the contents.  Eduardo Cardoso returned some Millennia Mail Art all the way from Portugal and Janie Pinterits sent this just across the Bay.

Another cool postcard from arlikeart in Florida and finally a postcard from the Hilarious Assistant Principal of Staten Island.
Posted by Tofu at 5:51 PM No comments: