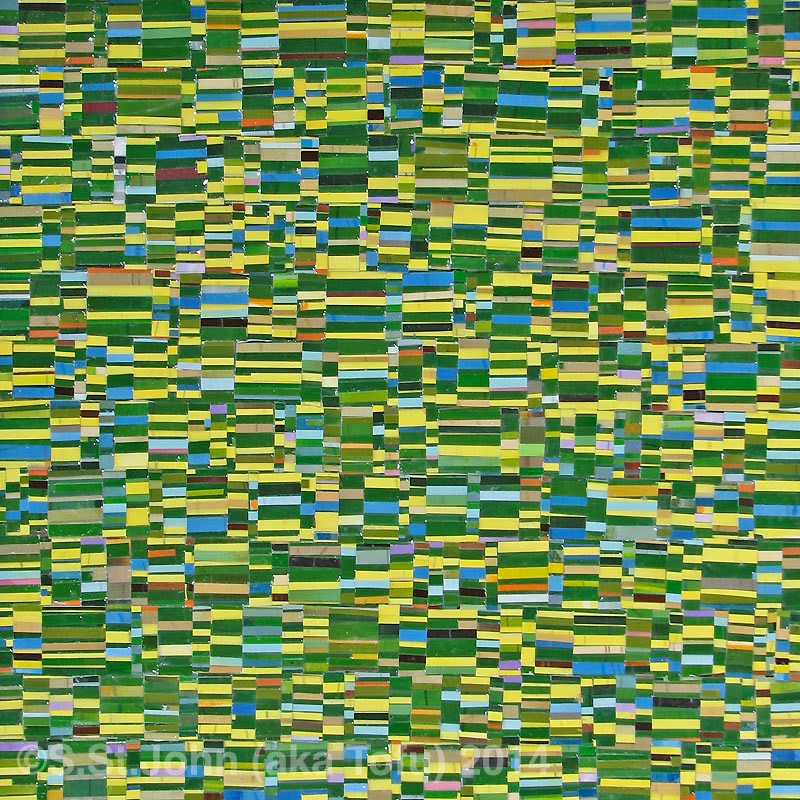 It’s the time of the year that when you head out of San Francisco you’ll encounter fields of bright yellow flowers.  If you go north towards Napa or down the coast, wild mustard (Brassica rapa) is blooming everywhere.  The San Mateo coast is always pretty, and with fields that seem to glow yellow, it becomes spectacular.  Alas, the wild mustard is another invasive species.  But, if I am to depict the California landscape for my Collagescape series, I can’t hold the mustard.  Last week it was glorious down by Pigeon Point Light Station State Historic Park (see photo below).   A roadside stop inspired my latest piece. Pigeon Point will be shown in my Collagescape exhibit opening in August. 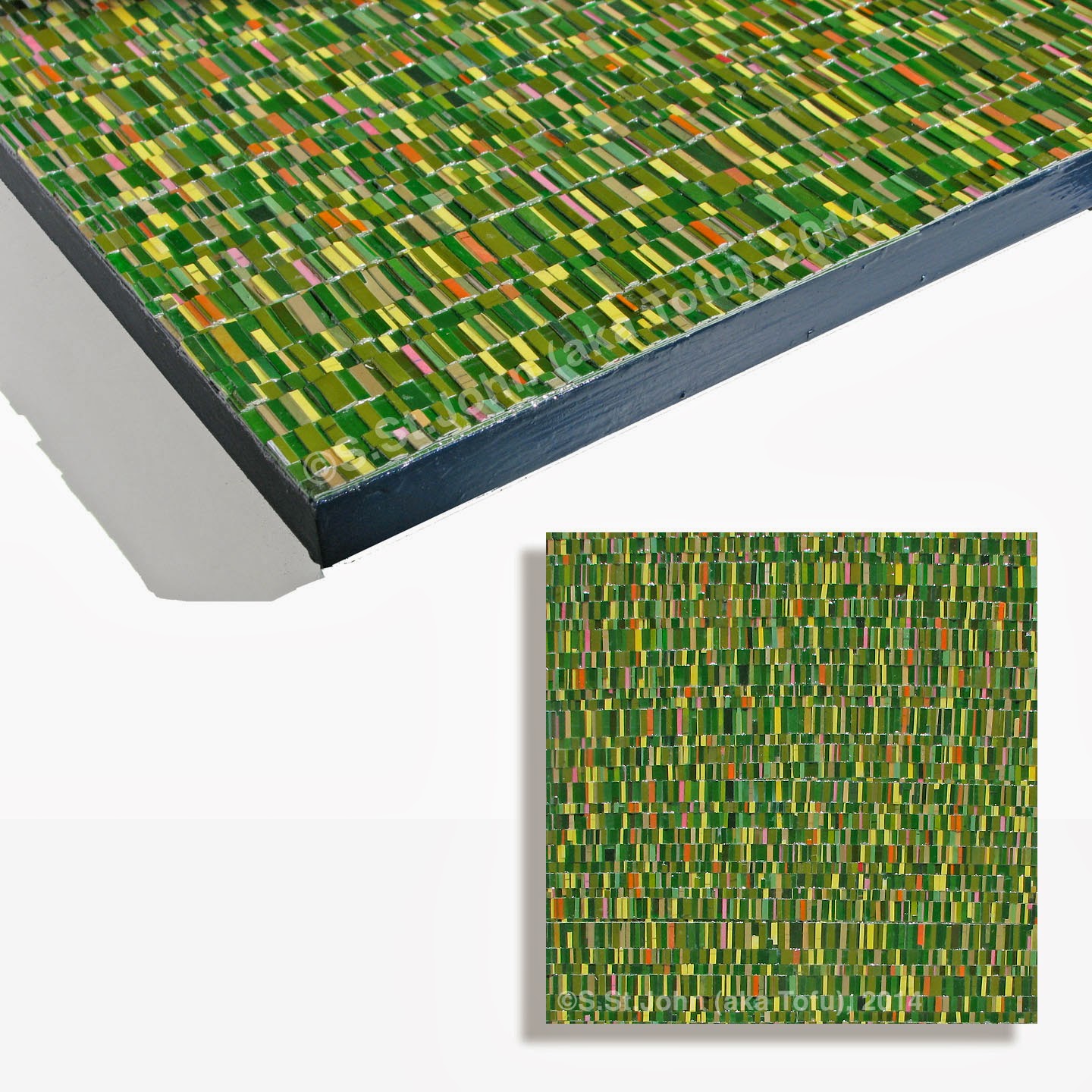 
Last week, on one of those perfect California days, a friend and I headed south from San Francisco for a little day trip — stops at a few beaches, lunch in Davenport, jam tasting and a walk through some redwoods.  The morning started at Pescadero State Beach where the surf was breaking on the rocks below the bluffs, sea lions bobbing just off shore and ice plants, lots of ice plants – the thick mats of ice plants that were planted years ago in an effort to combat erosion.  They are an invasive species that naturalists are now battling to remove.   When the U.S. Postal Service issued a California stamp in 2008 it featured an image of Big Sur with ice plants in the foreground.  I am sure the Postal Service would never have anticipated the stamp would be controversial.

Like them are not, ice plants are part of the California landscape.  With that in mind I strived to capture their palette.  I also used a pattern that referenced a patch of ice plants without attempting to be too literal.  And, even though I understand the problems posed by invasive species, I confess to a certain fondness for ice plants.

Ice Plants will be shown in my Collagescape exhibit opening in August.
Posted by Tofu at 5:05 PM No comments: 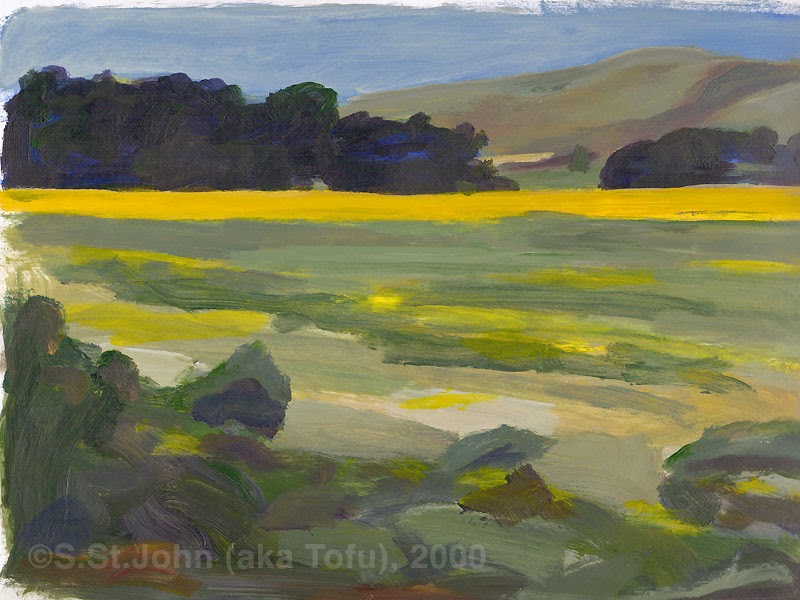 This week marked 24 years of living in San Francisco.  I love San Francisco, but one of my favorite things about the City is escaping.  Even a quick day trip and you can easily ground yourself in nature close by.  The ride down Route One to Santa Cruz and back has always been a favorite.  When I make the trip there are usually plenty of stops along the way.  Yesterday was no exception with a stop at Pescadero State Beach, lunch in Davenport, Swanton Berry Farm and a walk through the redwoods at Henry Cowell State Park.

It was a good way to start spring.  Big yellow fields of mustards are glowing all along the way.  As I drive I always remember many paintings inspired by previous trips.  Above is one of the fields outside of Half Moon Bay.  A quick, small painting that blurs like the view as I might have zoomed by on a day 15 years ago.  It’s time for those yellow fields to make a sequel.  Yesterday I was taking plenty of pictures as “color studies.  A very yellow Collagescape is coming soon.
Posted by Tofu at 10:31 AM No comments: 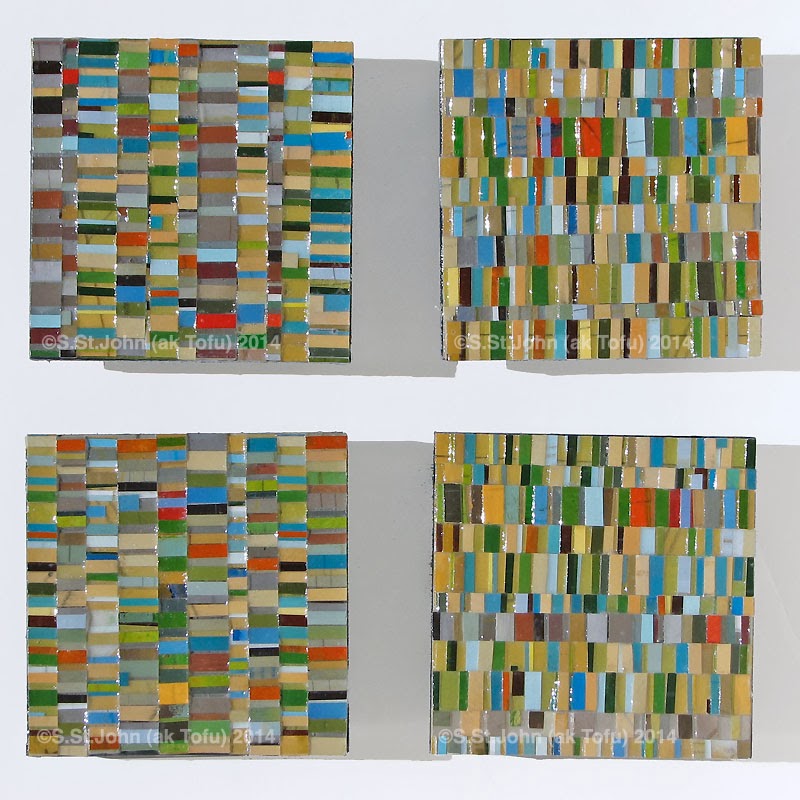 A new little series of small collagescapes, all 4"x4" titled Country Road #1 through #4. 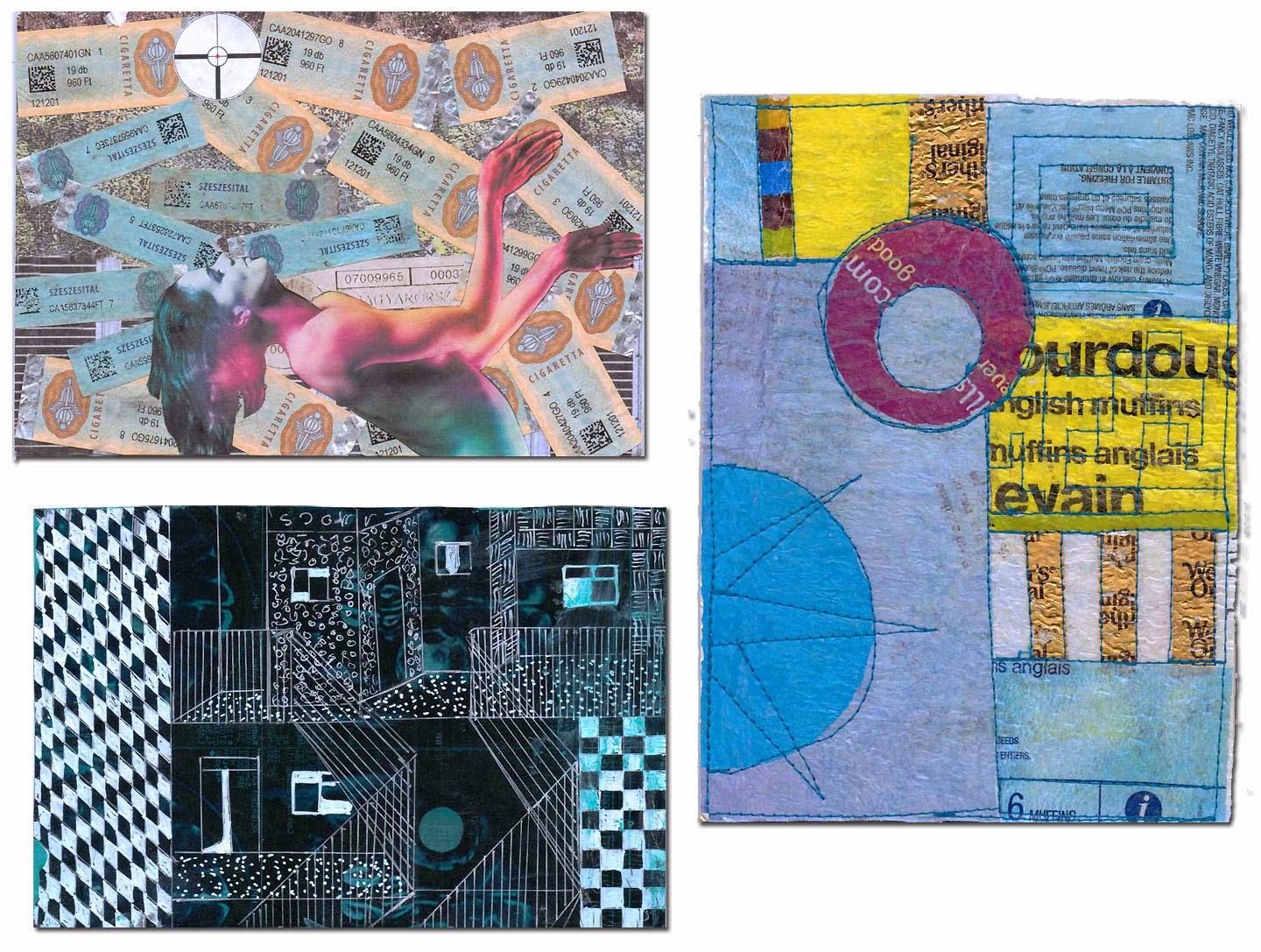 Just a few highlights (still more to sort through) of the mail that landed in the post office box recently: 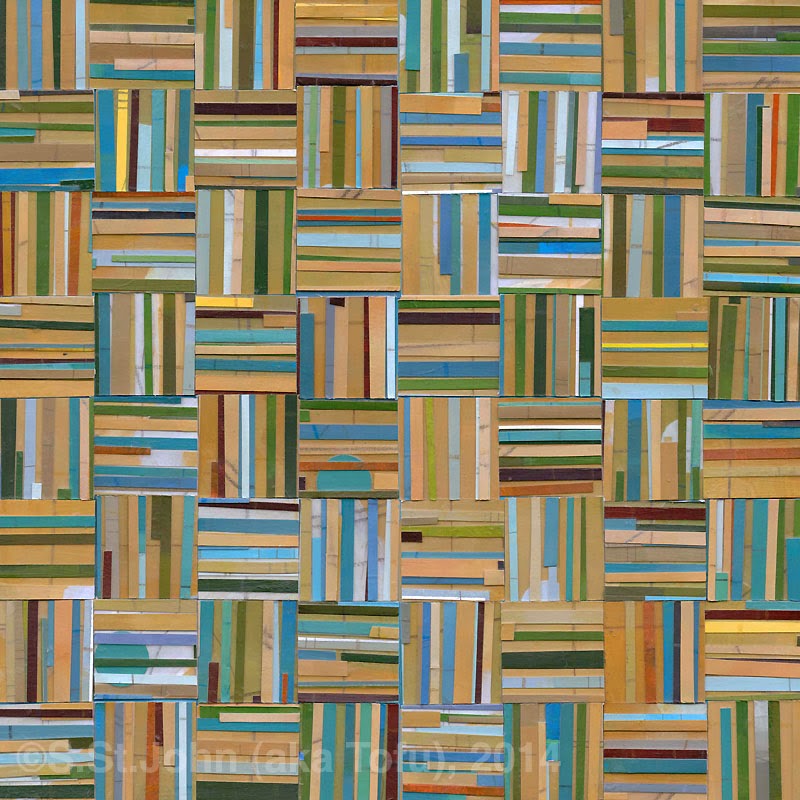 Yellowstone National park has been in the news lately.  Last week was the anniversary of the founding of our first national park.  And then there was this sensational and misleading story that was making the rounds online – yes, Yellowstone is a volcanic caldera, but no, it’s not about to blow in a cataclysmic eruption.  The Discovery Channel probably doesn’t help matters.  All this Yellowstone talk reminded me that I have not been back in 8 years.  Yellowstone makes a good long road trip from San Francisco.  It helps f you have the time to take a few days getting there and back with a lot of stops.

The last time I visited Yellowstone it was a September.  The grass was golden and brown and the leaves were yellow.  The park was near empty, warm during the day and freezing at night.  The yellows and gold contrasting with the “unnatural” looking blues, or maybe unusual blues, of the hot springs and geysers.  There were some of the colors that inspired this latest piece for the Collagescape Series. Not to forget those big, brown bison at every turn.

Yellowstone September will be shown in my Collagescape exhibit opening in August.  In the meantime, prints and additional items with this image are also available from Society 6.
Posted by Tofu at 8:56 PM No comments: 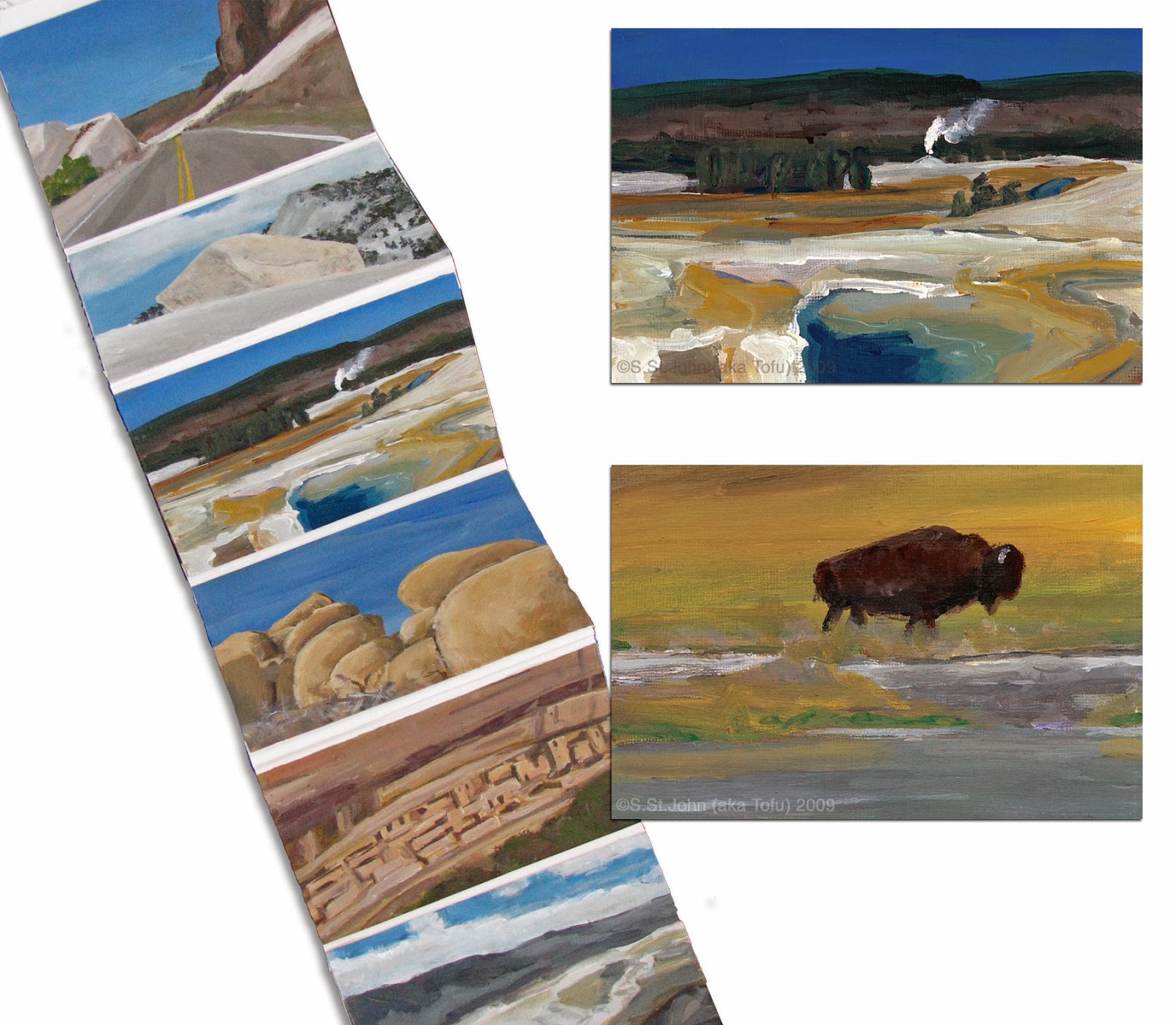 America's first national park, Yellowstone National Park is 142 years old today.  An amazing place and one of the many parks that inspires my work.  The image above are two of the handmade Yellowstone postcards included in a series of postcard booklets created in 2009.  More national park inspired work can be seen at tofuart.com
Posted by Tofu at 10:37 PM No comments: