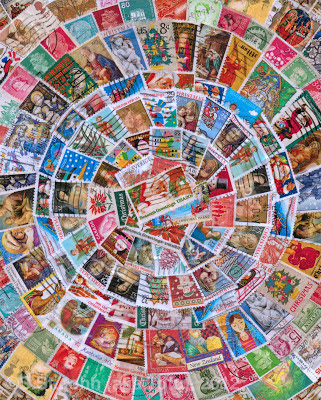 There is a reason you save all those old Christmas cards and the stamps off the envelopes.  Below is one of the pieces for the 2011 Project made with old Christmas cards from when I was very little.  And this year’s card (shown above) includes stamps that I have been saving for years. 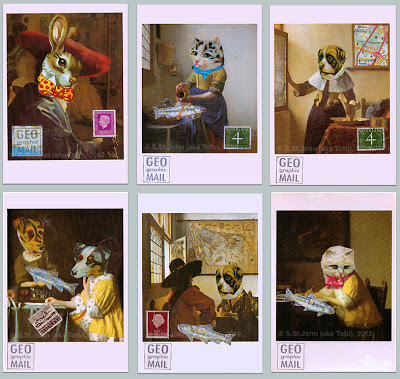 What to do on a cold, gray December day. How about Round 2 for the Geo Graphic Mail Project? This time a series of modified Vermeer postcards with stamps, maps, and happy little pets.  There are Vermeerhares, Vermeerdogs and, of course,  Vermeerkats. 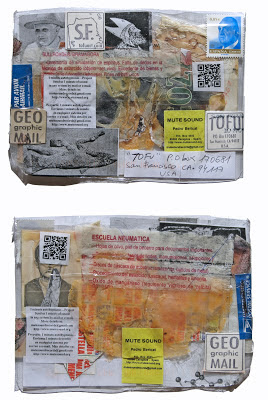 Last month I sent out a new series of Geo Graphic Mail Art.  They’ve been ending up all over the world.  This week, one came back, well sort of.  The Spanish artist Pedro Bericat cannibalized the envelope and incorporated into a new piece he sent back to me (see above).  His stuff is always hermetically sealed in clear plastic tape with mystery contents transforming inside (sometimes moldy contents).  I never dare to break the plastic seal, but I love getting these.
Posted by Tofu at 1:57 PM No comments: 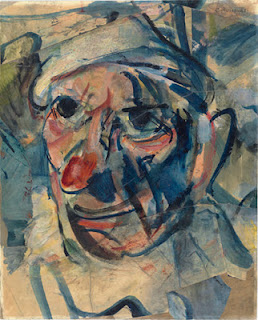 I’ve become rather dispirited by the trend of blockbusterism in museum exhibits.  Desperate to draw the public away from their iDevices, museums hype up shows like the latest summer movie.  They focus in on certain artists who could be described as the A-Listers of art history.  Museums stock the gift shop with mugs and trinkets and wait for the throngs to come.  And, well, they do.  These are the shows that are impossibly crowded.  Even on a rainy Wednesday, you don’t stand a chance of looking at anything that is on the audio tour.  Isolated behind headphones the sheep stop where they are told and then stand and gape.  I encounter this at the major museums in San Francisco, but it is not an isolated problem, it’s a global curse of big city museums — all the more reason to stop by museums in places like Reno.

I had to keep an open mind as I approached the de Young for the latest big show.  The William S. Paley Collection: A Taste of Modernism.   I braced myself for crowds and hype, but I couldn’t let an opportunity go by to see some Gaugins and Cezannes when they come to San Francisco.  Along with you Gaugins and Cezannes, you have your Matisses and Picassos. All the names sure to bring in the once-or-twice-a-year crowd who need to see some art.  Art they “know” is good.

Every work by a great master is not necessarily a masterpiece.  Okay, there is not a bad painting in the exhibit.  But let’s be honest, they are not all great either.  Truthfully, much of Mr. Paley’s collection is full of second-tier work by big name artists.  This is the type of collection that is amassed by the wealthy when they are more-focused on names rather than art.  When that happens, no matter how rich the collector, they are usually a generation or two behind.  They rarely can acquire the best work from a famous artist.  But there is treasure to see in the show.  Much of what I call “second tier” is quite strong, smaller paintings that would have been overlooked by earlier collectors.  In particular there is a nice wall of little Édouard Vuillards.  The strongest work in the show might be the work by the expressionist Georges Rouault (including the work shown above).  Ironically, it’s the collections first tier work by a second tier artist like Rouault that really shines.

I have to mention the last work in the exhibit.  Seemingly out of place, just before the gift shop, was an Edward Hopper watercolor of Charleston, South Carolina (a place not particularly associated with Hopper).  It’s another work that makes the show, hype aside, worth seeing before it closes at the end of this month.

This is why I experiment 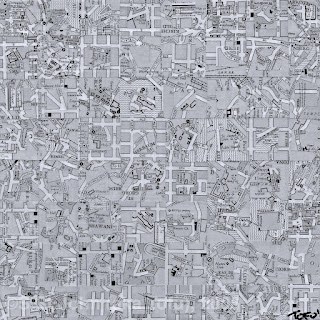 I am always a big advocate of experimenting in my art.  When I do come up with a successful idea, I want to work on it through a number of pieces and keep refining the idea. As I am working on one idea, it always takes some self-discipline not to get distracted by the new ideas percolating in my head. And then there are times when I don’t even notice I am working on a major experiment until I see the results of the finished piece.  This week I was reminded of one my favorite experiments.

For the first decade of the 21st Century map-based collages dominated my work.  There was a great deal of experimentation with pattern, types of maps and color palettes.  I usually work small first.  Because my work is so labor intensive, I do not want to spend weeks working on an experimental piece I might consider a failure.  Back in December 2006, I did this 8”x8 prototype piece seen above.  This was a pattern I had been working with for a few years, but that time I decided to do a black and white version.  I used only street maps of different cities found in the backs of atlases from the 1940’s and 1950’s.  All of the maps were interspersed in the index section of the atlases.  There were also black and white photos of various cities on those pages.  What I had not realized is that by using those maps, I was sourcing the same ink that was used to print the photographs.  The color of the maps was not just black and white but had the distinct tone of black and white photography.  It was a delightful surprise and reaffirmed why I keep experimenting.  In the following months I did larger pieces with the same material.  I was reminded of this prototype piece this week when my gallery let me know they had sold one of the larger pieces.
Posted by Tofu at 4:50 PM No comments: