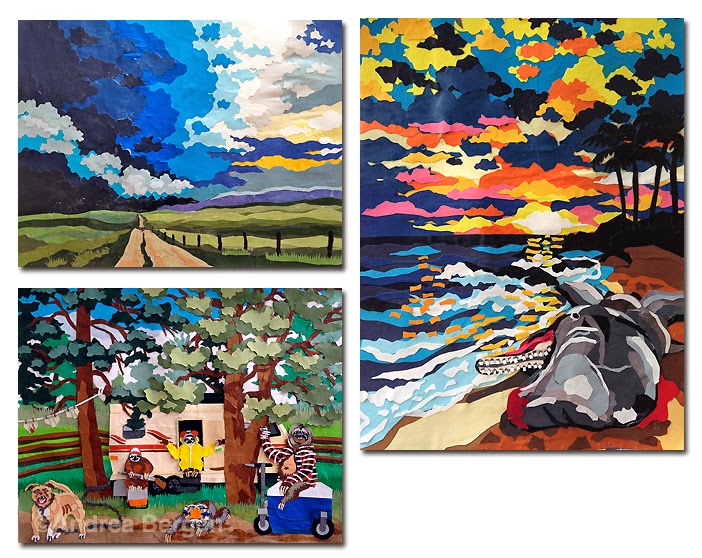 When I was visiting Studio 17 in the Mission and discussing Collage meets Landscape with another artist, she immediately said, “You must meet Andrea!”  I followed her down the hall to Andrea’s studio and, before I could even say hello, I knew I had to have her work in the show.

Andrea’s does cut paper collages of landscapes and wildlife scenes.  At first glance they reminded me of cheerful, old fashioned, paint-by-numbers works.  A closer look and you realize they are all constructed from hand cut pieces of colored paper.  And the images can be deceptively sweet until you take a second look and realize the wildlife is often exacting revenge on humans and other animals.  Some are quite twisted but the palette prevents them from being described as “dark.”  I keep returning to her website, and every time I do, I find myself laughing out loud at things like polar bears wrestling great white sharks and raccoons smoking big fat joints.

More of Andrea’s work can be seen on her website. 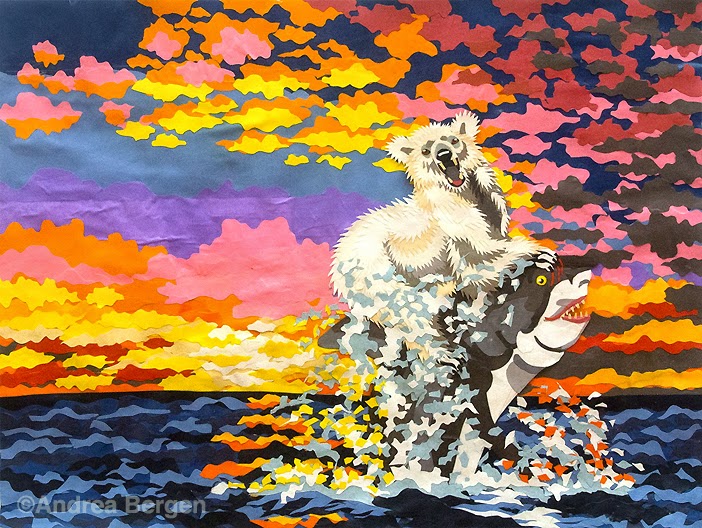 The Collage + Landscape = Collagescape will be on view at San Francisco’s Glama-Rama Salon and Gallery at 304 Valencia Street in San Francisco.
The show runs from July 29 to September 28, 2014 with an opening reception on Friday, August 1 (7pm to 10 pm).
The exhibit will have two components:
On the main level, there will be an exhibit of my new series of work called Collagescapes.
On the upper level of Glama-Rama, I am curating a companion show of mixed media works, where the theme will be Collage meets Landscapes.
Posted by Tofu at 10:00 AM No comments:

From Sweden to San Francisco 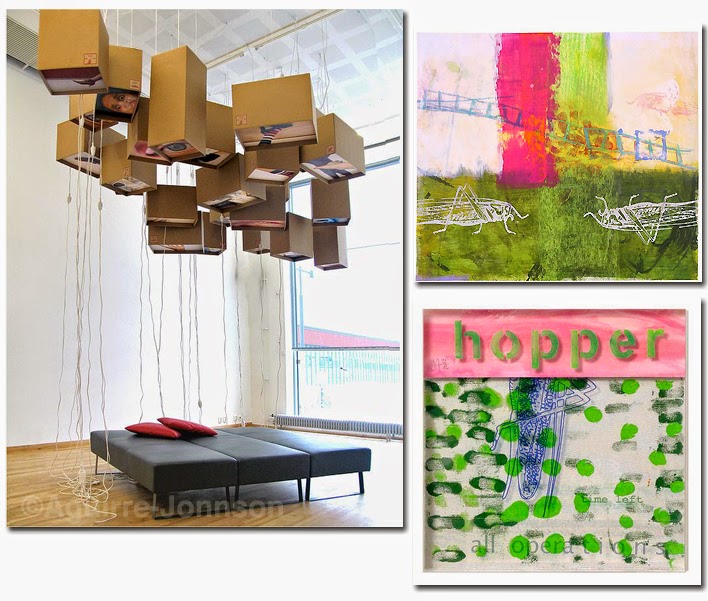 In just a month Collage + Landscape = Collagescape opens.  Over the next few weeks keep following this blog as I start previewing and introducing you to the 11 artists who will be participating in Collage meets Landscape upstairs while my new Collagescapes are shown downstairs.

Our first artists are Giovanna Aguirre and Lars Jonnson. Giovanna and Lars are an artist duo based in Örebro, Sweden.  They have been working collaboratively for over 20 years.  Giovanna is a native of Bolivia who joined Lars in Bonn, Germany where they worked together for many years before returning to Lars’s native Sweden.  Their work has been shown extensively throughout Europe and we are excited to bring them to San Francisco for their American premier.  Collage meets Landscape will be the first time their work has been shown in the United States.

Their mixed media works on paper can be viewed at jonnsonaguirre.com as well as photography and video of installation pieces including this one from 2008’s Örebro’s biennale known as OpenArt where Lars serves as Project Leader. 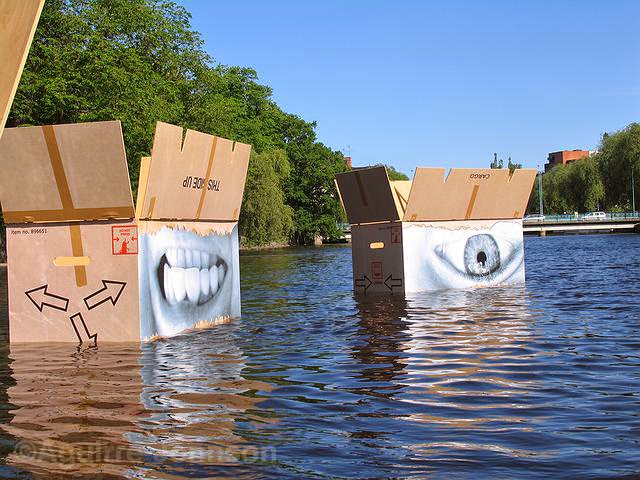 The Collage + Landscape = Collagescape will be on view at San Francisco’s Glama-Rama Salon and Gallery at 304 Valencia Street in San Francisco.
The show runs from July 29 to September 28, 2014 with an opening reception on Friday, August 1 (7pm to 10 pm).
The exhibit will have two components:
On the main level, there will be an exhibit of my new series of work called Collagescapes.
On the upper level of Glama-Rama, I am curating a companion show of mixed media works, where the theme will be Collage meets Landscapes.
Posted by Tofu at 9:59 AM No comments: 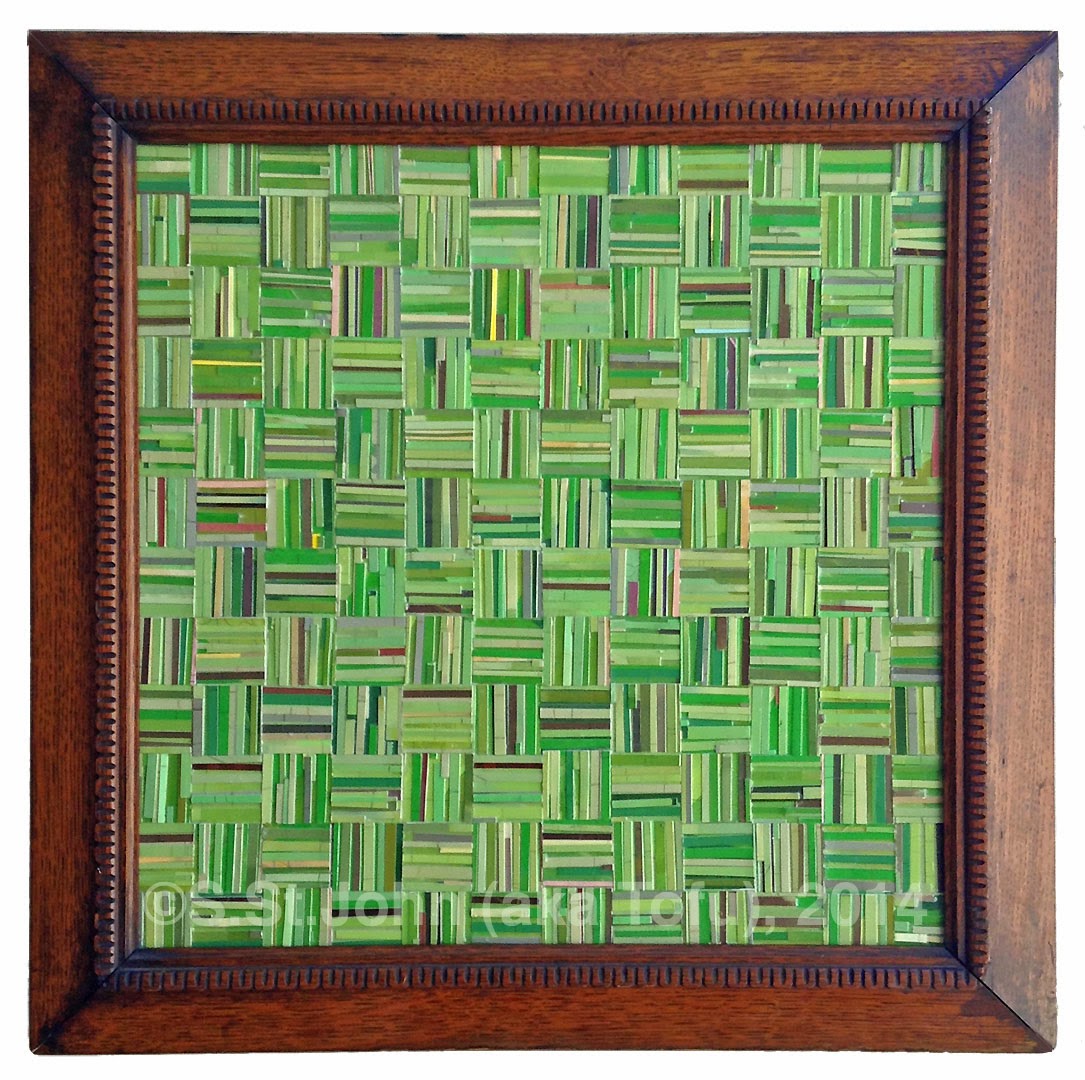 The latest piece in the Collagescape series really started with a frame I rescued from my parent’s Cape Cod basement a few years ago.  It held an inexpensive print.  It was something my dad bought for a small sum at the Goodwill or some Buffalo, New York thrift store circa 1970.  When I was young we lived in a big Victorian house in Buffalo with plenty of wall space to fill, the Cape Cod house I finished growing up in was all about windows and less wall space.  Things ended up in the basement and attic.

The quality of the Arts & Crafts frame made me suspect the cheap print was not the original purpose for the frame.  When I removed the backing, I found a certificate (see below) that the frame was custom-made for about 1894.  The certificate commemorates the passing of a board member of the Buffalo State Hospital, Charles G. Curtis, who passed away in September 1893.  I assume this was presented to his family.

The Buffalo State Hospital (originally the Buffalo State Asylum for the Insane) is a registered National Historic Landmark with grounds designed by Fredrick Law Olmsted.  I remember the imposing structure from my childhood and will never forget the time my mom and a friend snuck inside.  This was about 1970, a time of reform when horrific conditions were being exposed in mental hospitals all around the nation.  My mom and her friend wanted to witness the chains still mounted to walls before they were removed.

Today a more pleasant story for the frame, and a nod to Mr. Olmsted, as I have created a forest collagescape to be placed inside after I removed 120 years of grime to expose a beautiful piece of 19th Century craftsmanship.  The repurposed, antique frame is now part of the piece – the frame and the art inside it are meant to stay together permanently.

This piece will be featured in my Collagescape exhibit that opens on July 29 and runs through September 28. 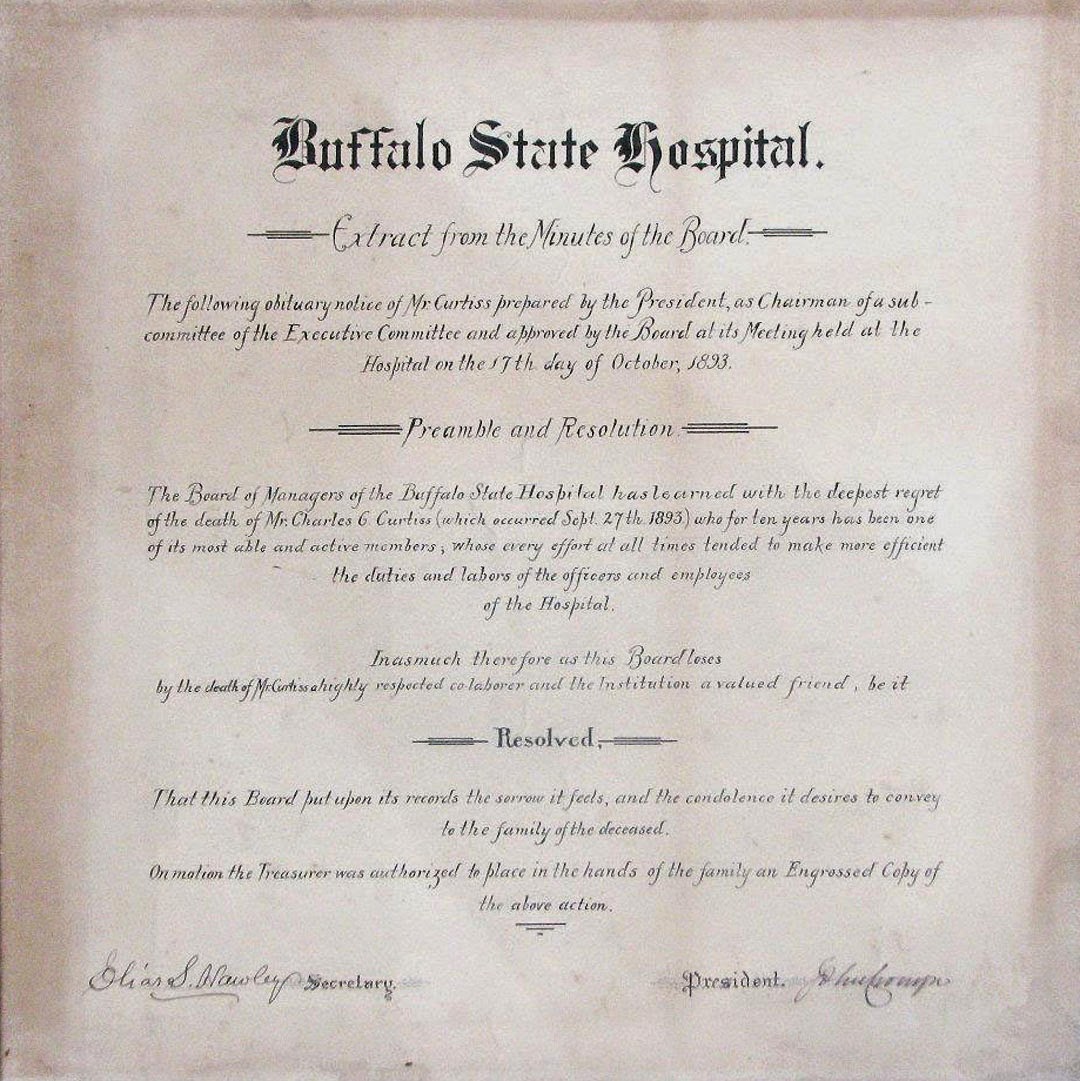 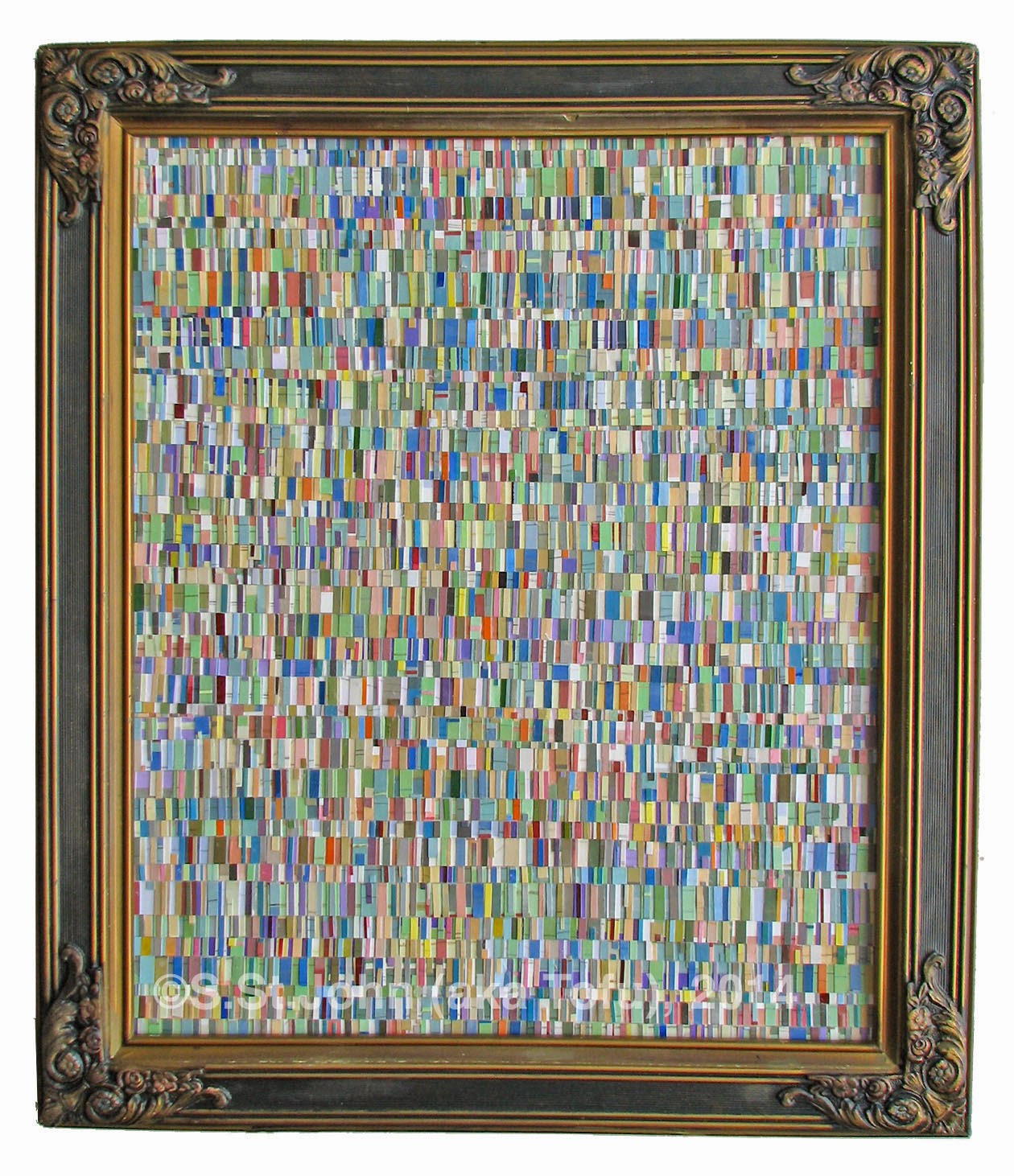 The latest collagescape is more cityscape than landscape.  I wanted to capture the Victorian houses that my City is so well known for.  I also went for the current palette used on most houses in San Francisco.  The palette changes over time, if you find a book of Victorians from the 1980’s, the bright colors appear a bit shocking, looking more like the set for a Thompson Twins or B-52’s video.  In their original state, more than a century ago, the paint jobs were far more subdued.  I have come across a few books written by purists who rail against modern affectations such as gold trim.  If only the problems of the world were otherwise solved and we could worry about what color a Victorian “should” be painted.  Frankly, I like color, lots of color (in case you can’t tell).

As a reminder that this series is about painting as much as it is about collage, this piece has been placed in a traditional frame.  The repurposed, antique frame is now part of the piece – they are meant to stay together permanently.  The frame itself was a bit beat up and was probably made about 1900.  A thrift store find by my dad circa 1970.  It had a tattered and forgettable print and hung on the walls of our Victorian home in Buffalo before spending over 30 years in a Cape Cod basement.  Now it’s come home to another Victorian City and found new life.

This piece will be featured in my collagescape exhibit that opens on July 29 and runs through September 28.
Posted by Tofu at 12:36 PM No comments:

Return of the Sprites 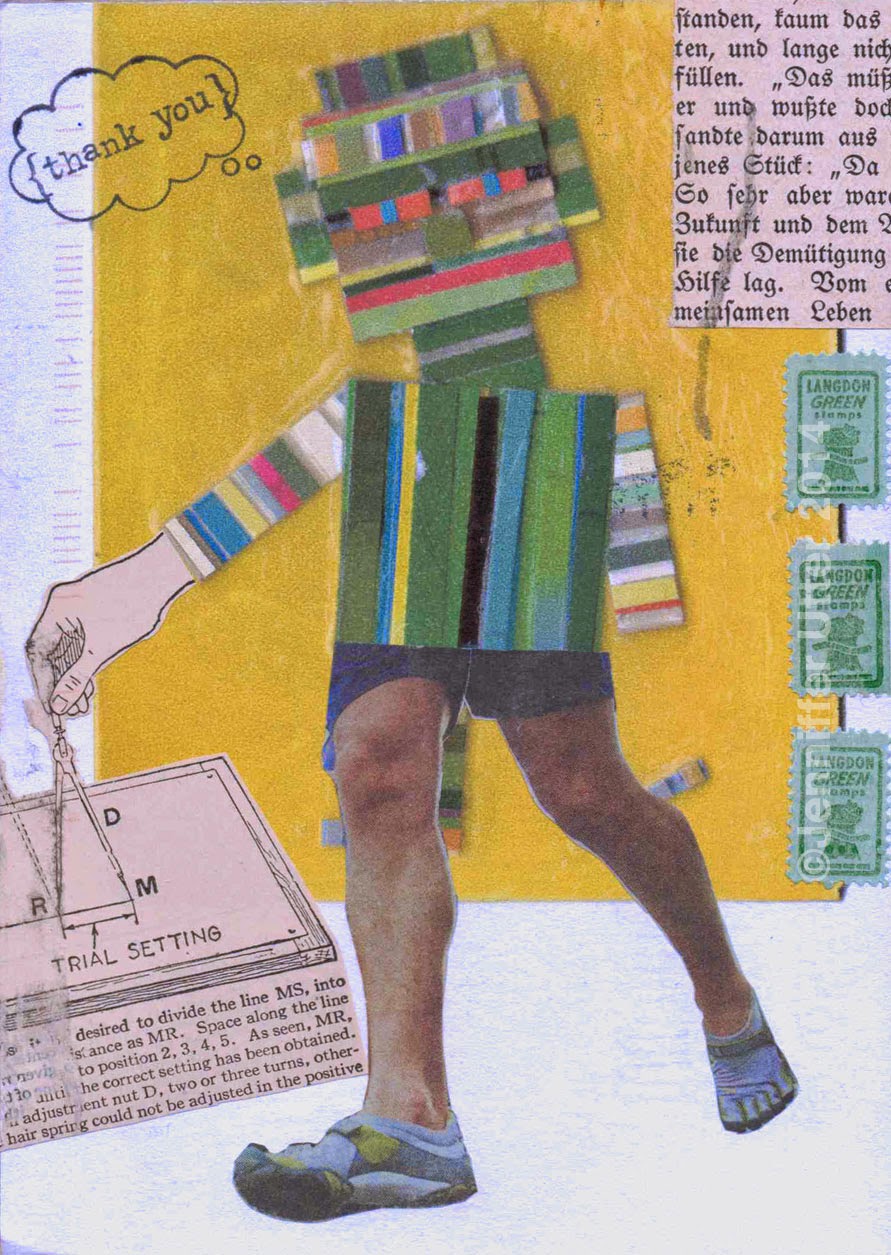 In April I sent out a new series of mail art – The Sprites.  Recently one came back, well sort of, Jennifer Utter scanned it and incorporated the sprite into a new piece of mail art that she sent back to me.  I love it!
Posted by Tofu at 10:52 AM No comments: 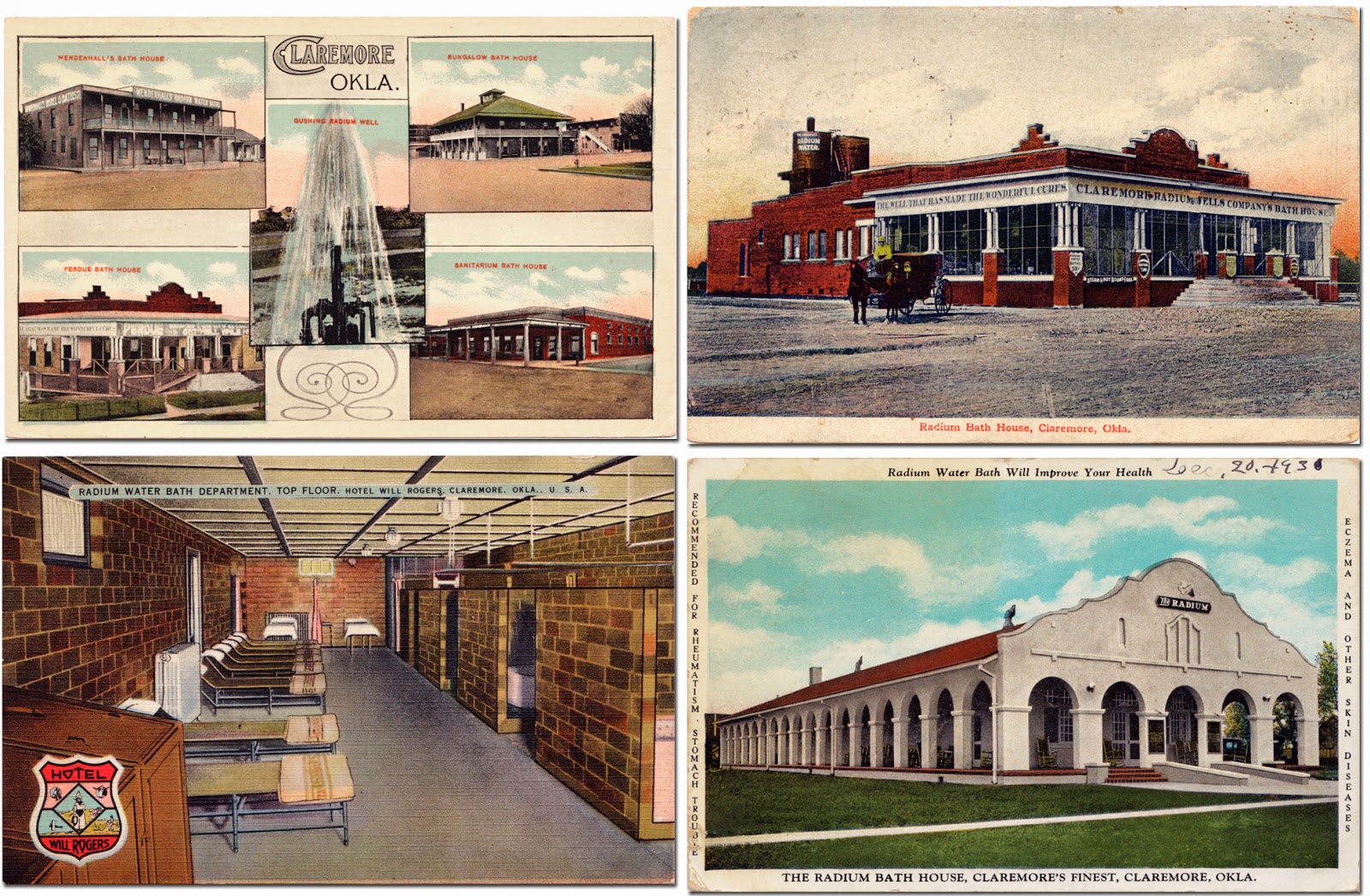 I love old postcards, cutting them up for my art and often, if they are unused, I mail them out as if I was touring around in 1930-something.  I certainly am not the only one who gets into vintage postcards.


The San Francisco author St. John Karp took some of his inspiration for his novel Radium Baby from his collection of Claremore, Oklahoma postcards and other ephemera.  A few examples are shown above, and more can be seen on his blog about the town where travelers went to enjoy the curative powers of radium water.  Fortunately for all who partook in the waters in Claremore, they were mere mineral baths and contained no actual radium.  And if you need a good summer read, get yourself a copy of Radium Baby.  It’s guaranteed to cure what ails you, or at least entertain you…. 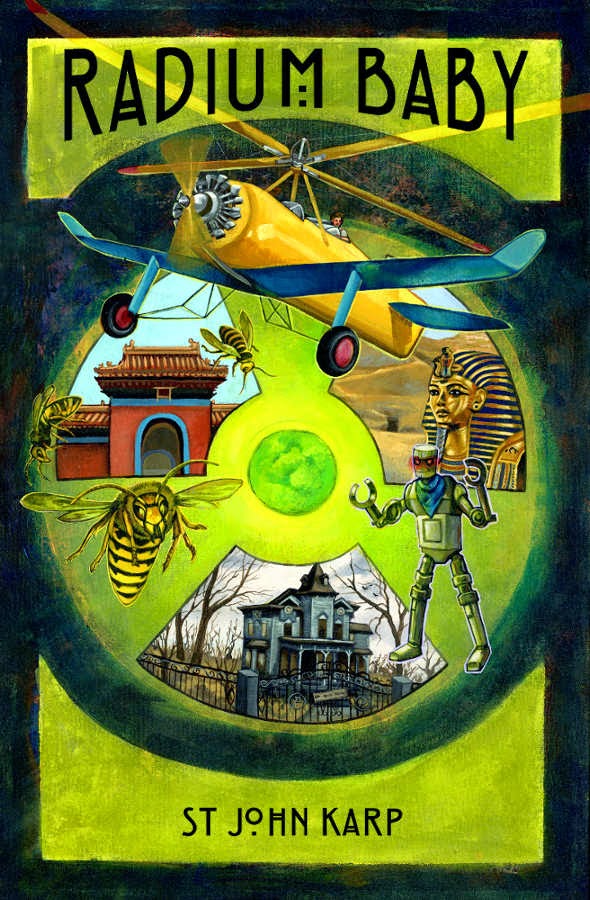