After my recent Southwest art adventure, it’s time to start making some art to reflect the road trip.  As a Californian I don’t always think about green being the color of the desert – especially as we’re in the middle of a drought.  But then I arrived in a hot and humid Tucson just as thunderstorms moved in, I experienced monsoon weather in the Southwest – they have had a wet year in Arizona and New Mexico and the desert is green.  I am also thinking back to the work of the Tucson artist Rose Cabat I saw for the first time in Tucson – the glowing shades of green on her ceramics are starting to make even more sense to me as I look closer at Tucson Green.


I have started some Tucson work with both a landscape and a collagescape.  More desert-inspired work to come….
Posted by Tofu at 12:04 PM No comments: 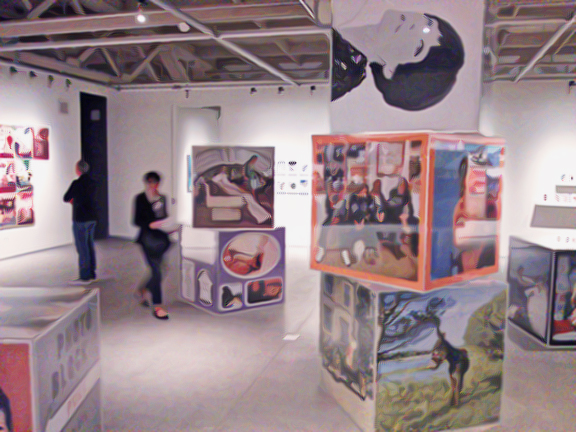 Way back when I visited Marfa, Texas I fell in love with Ilya Kabakov’s installation School No. 6.  For me it was the notion that a collage could jump off the paper and be done on a large scale and fill a space.  But Marfa has never really been about minimalism – it’s about what I prefer to call maximalism.  The visit to Marfa helped inform my own installation in 2012, Imaging Val Travel.  This week, I was reminded that I want to do more installation creating collages in big, large spaces.  The current show at San Francisco’s Pier 24, titled Secondhand, is brilliant.

As the name Secondhand implies, it’s all about re-use and repurposing – and at Pier 24, that means photography.   For this exhibit, some of the galleries feel less as if they are curated and more as if they are large collages in themselves.  It begins as visitors are greeted by a wall of vintage employee badges hung in a grid at the entrance.   The concept of curation as collage is also evident in three rooms filled with photos of various ages, assembled and hung as an Archive of Modern Conflict.  For me, the show’s star is Erik Kessels – his installation in almost every picture includes large reproduced, plexi photo cubes – the ones that were on every coffee table in the 1970’s.   His installation Album Beauty was my favorite.  Cases displaying various family photo albums in the center of the room with the albums and photos reproduced on a large scale throughout the room, including some huge prints incorporated into the room’s wallpaper.    It’s a mix of various stranger’s photo albums and personal photos.  I felt the same sense of invasive detachment that I feel when I use old, found photos in my own work.  I just kept standing in the middle room and thinking to myself – I want to do this!

The show runs until May 31, 2015 – but as the museum is getting better known, I recommend making your reservations well in advance as things book-up ever quicker.
Posted by Tofu at 1:00 PM No comments:

San Francisco Oak Street’s is one of the “freeway” streets – those 1950’s era cars-above-all-else ideas.  They ripped out streetcar tracks, narrowed the sidewalks and made three lanes of one-way traffic zooming across the City.  It’s noisy and full of exhaust.  For a year before moving onto Oak, I dreamed of living along a river.  Little did I know, the “river” would be a rush of cars.

The block between Scott and Pierce Streets is one of those loud, high-speed blocks.  But for those of us on the sidewalks, it’s a different world.  After we negotiate the dangerous intersection at Scott and Oak with its confusion of bikes and cars, we have one of the friendliest corner stores in town.  The forlorn laundromat next door has a kindhearted ghost.  The block is full of some of the oldest and least picturesque of Victorians hiding under asbestos siding.  At the corner of Pierce be sure to say to our neighborhood’s friendly watch cat.  All the cars aside, there is always a huge crowd of butterflies who make the street their home.  In the middle of it all I have some neighbors who are dedicated recyclers, or I should say freecyclers.  They leave all sorts of things out for re-use.


Last month’s offerings including this unused roll of carnival/raffle tickets left out on the street.  I couldn’t resist.  But I really don’t need to keep these coupons.  Today’s outgoing mail included some postcards incorporating the tickets.  I also did a series of small, 3”x3” collages made from the tickets.  They were mailed out with some more unused tickets so the artists receiving them can play it forward and also use them in their own mail art.
Posted by Tofu at 4:30 PM 2 comments:

Who is Dieter Haack? 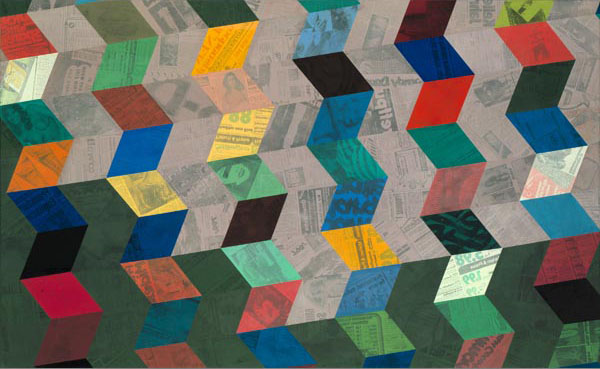 I am always on the lookout for “new” artists – making discoveries of art and artists that are new to me.  I constantly am striving to improve my own, personal, art education.  I see the occasional show, stumble across an artist online, get a tip from a friend, etc.  Rarely do I find such a treasure that is virtually unknown in my circle.  I would be surprised if any of my American readers know the work of Dieter Haack.  Okay, stop reading and just go to his website (dieterhaack.de) and take a look.

Dieter Haack is a contemporary of Sigmar Polke and Gerhard Richter, but unlike those two well-known German artists, Haack is somehow overlooked in the United States.  I suppose the art smarties in New York, the gallerists and critics, and their circle of collectors, the ones that sit on boards of directors and open doors to American Museums, all have missed Haack.  I find that shocking.


I learned about Dieter Haack from some of his major collectors.  I feel honored to have some of my work in the same private collection with Mr. Haack. And now, it’s been a long time, but I need to get back to Germany for an art tour and see what else I have been missing….
Posted by Tofu at 1:16 PM No comments:

The SFMOMA comes to the Oakland Museum 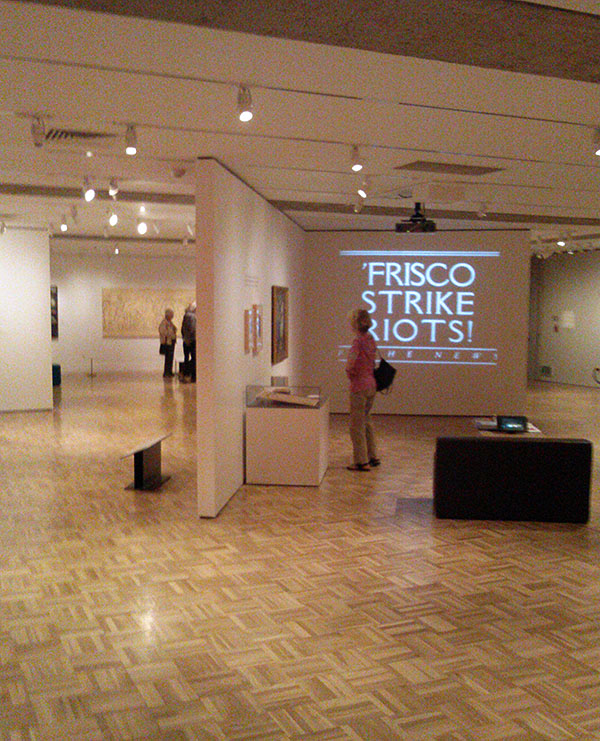 I made a visit to the Oakland Museum today.  I was aware they were having a special exhibit where they had borrowed work from the SFMOMA while that museum is closed and under reconstruction and expansion.  I assumed it was work I had seen before and was not expecting anything special – oh how silly of me.  Once again, the Oakland Museum has done an amazing job.  They have integrated their own work and included rarely seen work from both museums’ collection.  Some of the work has never been exhibited before.

The exhibit, titled Fertile Ground: Art and Community in California is the big don’t miss museum show in the Bay Area right now.  There are four components to the show.  It begins with the 1930’s including WPA art, murals and political work influenced by the San Francisco General Strike of 1934.  The SFMOMA’s Frida Kahlo portrait of her and Diego Rivera looks better than ever and is finally show in context.  After the first section, you pass into the postwar years.  You cross over from Telegraph Hill to North Beach and are immersed in the world of the California School of Fine Arts, Rothko, Diebenkorn, Cunningham et al.  Next it’s up to UC Davis circa 1970 when that little agriculture state university became the epicenter of contemporary art in the Western U.S.  The final component of the show takes viewers to the 1990’s and includes an emphasis on political activism.  There is a series of videos of different demonstrations and political actions back then.  The videos got me all excited when I realized I was at many of those demos.  I have to go and watch them again and look for myself on the walls of the museums.  I already spotted a few people I know.