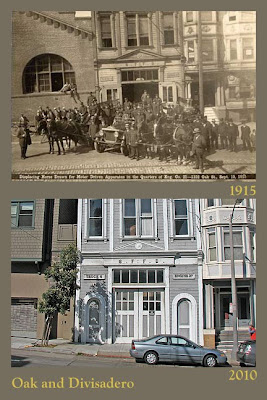 Today I was walking by and was invited in to look around. The officer from the Sheriff's Office told me if the doors are open, you're welcome to come on in. The building is being restored and eventually will be the HQ for the new Guardians of City Museum which will cover Police, Fire and Sheriff's Dept. History etc. I'm glad this building is being restored and staying in public hands. There are some old fire engines inside, it's pretty cool. The building is in relatively good shape as a new roof was put on some years back, but it prevented a lot of water damage.

The location of the main museum is yet to be determined in either a new or existing structure, probably downtown. Imagine keeping it in the neighborhood though? The tow truck garage on Fell behind the fire station perhaps? Maybe the Harding Theatre? Or imagine a museum where the ARCO station is on Fell and Divisadero.

The old station is across the street from the oldest house (still standing) in San Francisco. Today I learned that house caught fire after the 1906 Earthquake and was saved by the crew from the station. Which also probably saved the neighborhood from fire as well.
Posted by Tofu at 3:26 PM