The perfect time to exit through the cyber gift shop.....

Just in time for your holiday shopping – Society 6 is having all sorts of sales.  Right now you can get 20% off of everything + free worldwide shipping from 1:00 pm PST on Sunday, November 29 until midnight on Monday, November 30.

There are some other deals coming up in the next few days, but today and Monday look like the best bet.  They will be extending the free shipping until December 14.

On my Society 6 page you’ll find a selection of my images available on everything from mugs to pillows to covers for your electronic gadgets and phones to shopping bags.  Personally, I especially like the shopping bags.  They are really high quality.
Posted by Tofu at 2:30 PM 1 comment: 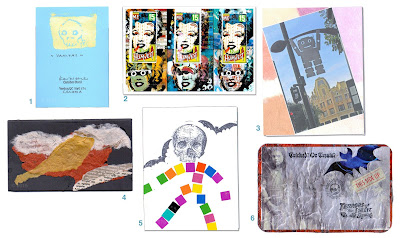 While I was busy in Sacramento installing the Pink Mail Art show, many of you were making and mailing some fun things to me.  The recent arrivals include:
Thanks everyone.  Now I need to get back to working on the next batch to send out.
Posted by Tofu at 7:16 PM No comments: 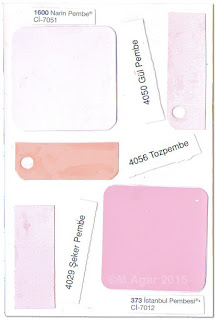 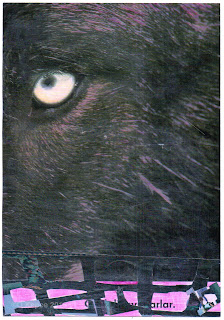 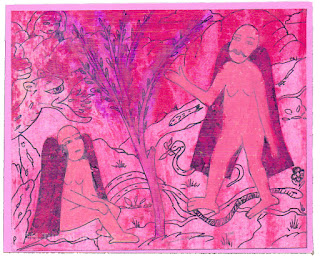 When you plan a mail art show and send out a call for artists you have to set a deadline. I knew, inevitably, that some pieces would be mailed in late.  Well, I am not the DMV, so I managed to get the stragglers in the show.  We had such a big response for the Pink Mail Art Show that we had to even use a second wall.  The show went up last week, we had a great opening reception for Pink Week.  Look what was in the post office box yesterday — these three wonderful pieces from Turkey (from Meral Ağar, Hilal Turşoluk and Öznur Kepçe.  I won’t be getting to back to Sacramento for a while so we only get to see these three pieces online.  But if we have a show next year, we have the first three pieces….

City Hall, 36”x12”, mixed media collagescape on board
Sometimes a collagescape is a landscape and sometimes it is a cityscape.  My latest collagescape is inspired by San Francisco’s City Hall.  This year, as I celebrated my 25th year living in San Francisco, our City Hall celebrated its 100th anniversary.  I had a view of the dome from my first apartment, back in 1990.  In those days the cupric dome was the patinated green color that can now only be seen in old movies.  After a lengthy restoration in the 1990s, the dome’s blackened copper was treated with a finish that gave it a luster that has now faded to a dark gray.  For this piece I attempted to capture the many shades gray of the granite that dominates the building.  There are small hints of the colors from the interior marble and statues as well as the colors of the flags that fly on the building.  And of course gold for the trim that decorates the Beaux Arts Monument.

A Big Pink Thank You! 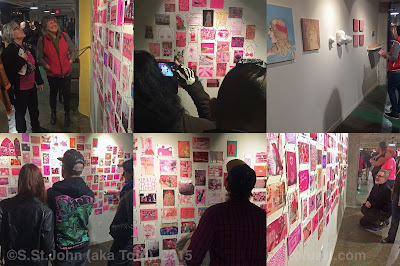 Last night was the opening reception for the 22nd Annual Pink Week.  There was a big crowd.  It was great meeting some of the artists who participated.  A big thank you to every artist who mailed work for the Pink Mail Art Show from all over the world.  Making art can be a solitary pursuit, but putting on a show like this is a collaborative effort.  Along with the artists I want to thank the crew at the Clayton Street branch of the U.S. Postal Service, friends who schlepped me to and from Sacarmento and helped with the install, all of you who promoted the show online and in the media, the San Francisco Correspondence Coop and especially everyone who came up and helped make the mail art making event happen this week at the Crocker Art Museum, as well the museum for hosting the event, Dana Iske and the folks at WAL (Warehouse Artists Lofts) for hosting the Pink Week exhibit and a special thank you for  the amazing Gioia Fonda who has been making this happen for 22 years! 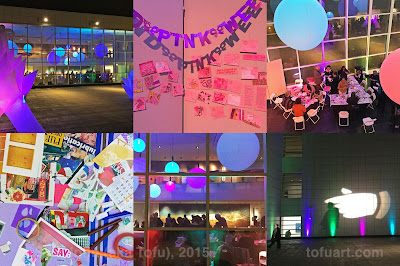 This year’s Pink Week in Sacramento is not just about the Pink Mail Art Show.  Last night the San Francisco Correspondence Coop travelled up to Sacramento to make some mail art with local artists and museum visitors at the Crocker Art Museum.  Pink Postcards were made and will be mailed out soon.  We also worked on an exquisite corpse piece.  It will be cut up into individual postcards and mailed to participants.
Posted by Tofu at 12:53 PM No comments: 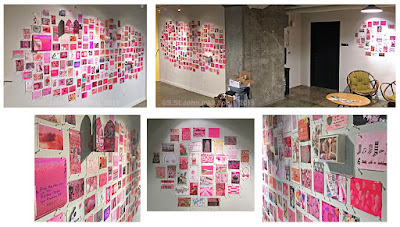 Wrapping up the install of 225+ pink mail art pieces, for the Pink Mail Art Show.  There are so many we had to use a second wall.  A big thank you for Pink Week Founder Gioia Fonda and my friend Elizabeth for helping with the install.  Our thumbs are sore this morning after using nearly 1,000 plastic push pins.


The opening reception at WAL (Warehouse Artists Lofts) in Sacramento is Saturday, November 14 from 6-9 pm and the show is up until December 10, 2015.
Posted by Tofu at 11:33 AM No comments: