I have never tried anything like the Millennia Mail Art Project before.  So it’s hard to predict how fast the layered cars will return.  So far, five completed cards have returned (shown above) and you can get a closer look here.  I also am finding the project mentioned on all sorts of blog posts and seeing examples of the cards in various stages of completion.  And, along with completed cards, I am getting some cool things turning up in my P.O. Box from artists who have completed the middle layers.  I still have a few cards left, so if you want to participate, send me an email via tofuart.com.
Posted by Tofu at 3:10 PM No comments:

Art at the California State Fair – Yes, the State Fair

It’s worth an annual trip up to the California State Fair in Sacramento, if only to escape the foggy, July weather in San Francisco.  No one gets out of bed in Sacramento and puts the heat on during the summer.  The state fair brings to mind images of prize winning dairy cows, corndogs and chocolate-dipped cheesecake-on-a-stick – a dessert that is so wrong, but so right.  Most people don’t think of art and state fairs, but the California State Fair is also a great place to see what’s happening in California Art.

There are galleries with traditional, expected crafts like quilts – each one a work of fine art.  One of the expo buildings is always devoted to the Youth Art & Design competition winners.  The quality and promise of the work never fails to impress me.  It’s a reminder that there is a new and very talented crop of artists coming up in California.  The Fine Art juried exhibit is always a treat.

The first thing you encounter when you walk into the Fine Art exhibit is Dave Lane’s Device for Creating Stars, Model A.  Its glowing orange center has added an element of James Turrell meets steampunk.  I was waiting for it to start vibrating and blast off through the roof.  You can’t go wrong with a giant (yes it’s made out of a lot of sugar) sugar skull, Rob Owens work Mija.  Pam Avery’s Majestic Red was a personal favorite – classic, California abstract work.  Sacramento artist Ianna Nova Frisby has included an installation piece titled Archaeoacoustics.  From the artist’s statement:

“Archaeoacoustics is the exploration of acoustic phenomena encoded in ancient artifacts. For instance, the idea that a pot or vase could be "read" like a gramophone record or phonograph cylinder for messages from the past, sounds encoded into the turning clay as the pot was thrown. Although improbable, the history of such attempts has its own intriguing history.”

Finally, it was great to see a portion of Gong Yuebin’s installation Site 2801 was shown in the gallery.  I saw it twice at the Crocker Museum.  It’s one of the best things being shown anywhere in California this year.  It was also fun watching a boy of about 12 excited about the instrallation and explaining it to his friend.  Later I noticed him in another part of the show explaining the art.  It’s easy to tell a kid who has seen a lot of art and grown up in museums.

This year’s state fair runs through July 29.  Go on up to Sacramento, have a corndog and see some great art.
Posted by Tofu at 2:04 PM No comments: I love old photos of San Francisco.  I love seeing pictures of familiar places the way they looked in years past.  I can spend hours online browsing the San Francisco Public Library’s Historic Photo Collection.    It’s fascinating for me to see what was there 50 years ago, 100 years ago, or even in the 19th Century.  The library doesn’t have every photo though.  I find old photos from other online sources or poking in old albums at thrifts stores or at paper fairs.  Sometimes old photos just fall out of some used book I bought.

I am not sure where the photo pictured above turned up.  It’s marked “Valencia and 15th” in handwriting on the back.  I’d say it’s 1950’s.  And something tells me, we’ll know more about it soon.
Posted by Tofu at 6:57 PM No comments: 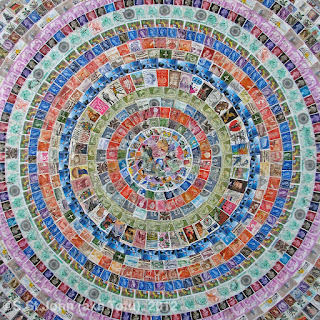 I have been working on a series of collages where the main, or only, source of collage material is old postage stamps.  Often when I delve into a new material there are unexpected results.  With stamps the postmarks form an unexpected and interesting layer.  I focus on laying down the stamps only to step back and see the postmarks on top adding another element to the work. 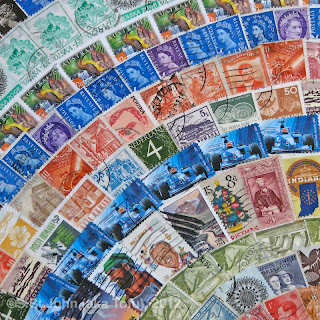 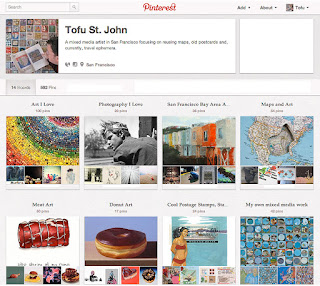 As new social network sites come and go, it’s hard to be sure which ones will really stick around.  Among a few of my friends, there is a bit of debate about Pinterest.  “What’s the point?” seems to be a question that often comes up.  Frankly, I am not sure where Pinterest is going.  But so far, I have found it useful.  It is a good way for me, as well as others, to share some of my own artwork.  But I also find it a useful way to catalog some of the work I like by creating different art-themed boards.

Earlier this year I wrote about how I have my own album of museum cards.  It acts as a personal, do-it-yourself, art book.  Sometimes I find it interesting to look at the book and reflect on cards I chose for it years ago.  It’s akin to reading old journal entries to look back on how one was thinking years before.  I’ve realized, with Pinterest, I am able to create a similar set of albums, but in this case I can share them with others.  It’s still too early to tell, but Pinterest, or something like it, might become a future source of reference for art historians.  They will be able to look back on the online boards created by artists to get a sense of what they were looking at and even being influenced by.  Now to get more artists to start using Pinterest, in the meantime, feel free to follow me.


An additional posting about artists using the internet to promote their work is here.
Posted by Tofu at 7:22 PM No comments: 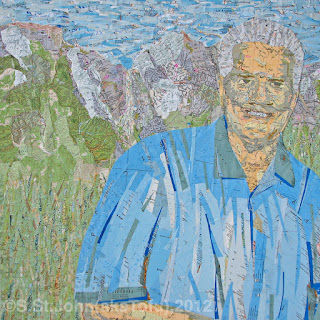 Let’s say you want to prospect for gold in California.  Well, you’ll need a map.  I started  with a big pile of California maps that would include pages from old atlases, road maps, topographic maps and ones I picked up at visits to state parks.  Try cutting them all up and putting them back together to see what happens.  I did and I ended up with a portrait of Huell Howser!

For those of you who are Californians, you know that our Huell is world famous.  I’ve been to countless places featured on his show California’s Gold and even discovered a few places courtesy of Huell.  Without him I might never have found Glass Beach in Fort Bragg.  That road trip lead to a whole series of beach glass paintings a few years back.  Huell Howser’s is one of the most likeable people in California and his enthusiasm for this wonderful place we live is truly infectious.  And, after watching something grim on the evening news, nothing is a better antidote than a bit of California’s Gold.
Posted by Tofu at 1:05 PM 1 comment:

It was exciting trip to the post office on Clayton Street today.  Some really cool cards in the P.O. Box, and best of all, the first piece for the Millennia Mail Art Project has been returned!

If you have completed a layer of any piece, please go to my website and send me an email.  Eventually there will be a list of participating artists and their web links (if available).  The first piece to come back includes work from Suzanne White, Connie Conway, Kate Ladd and Salinda Dahl.
Posted by Tofu at 6:20 PM No comments: 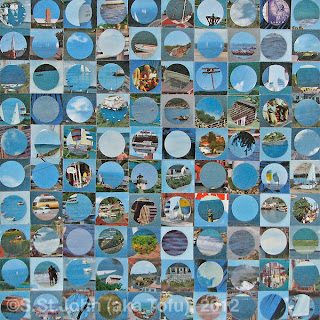 There is something about those Technicolor blue postcards, the garish blue triggers memories to vacations past.  Most contemporary postcards opt for more realistic colors, I am not always sure if that’s a good thing.  This piece has 200 pieces of vintage postcards from places like Cape Cod, Cape Ann, Maine and New Brunswick with everything from lighthouses to lobster traps.  Happy Summer!
Posted by Tofu at 1:33 PM No comments: 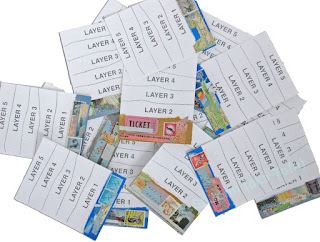 About 200 cards have been distributed for the Millennia Mail Art Project.  There is one last batch left.  If you haven’t gotten one and want to participate, send me a message and these will be mailed out on a first-come-first-serve basis.  Learn about the project here.
Posted by Tofu at 12:10 PM 1 comment: