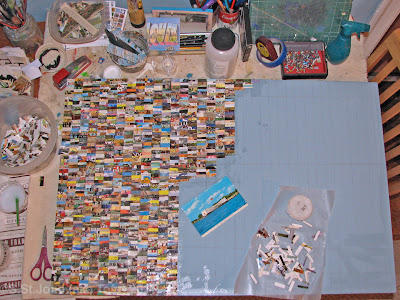 At the end of November I put out a call for postcards with the idea that everything I received would be used in the first piece of 2012. The response has been great and cards keep coming in. The blues in this postcard from Pearl Harbor (received yesterday) will be added into the piece today. It's a very labor intensive piece, but give me a few more days. It should be done soon.
Posted by Tofu at 11:31 AM No comments:

A Zoo Habitat for the Art Museum 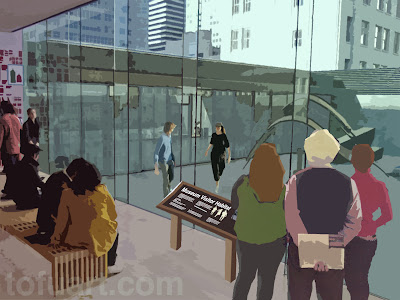 A few years ago the SFMOMA built a garage behind the museum. Instead of putting more cars on the roof, they did something terribly smart. They built a rooftop garden, installed sculpture and added an enclosed café space. It’s a great space and good place to rest and recaffeinate in the middle of a museum visit. One accesses the rooftop via a glass walled passageway from the fifth floor. Or, if visitors are meandering through the fifth floor galleries, they end up in a glass walled room a few steps elevated above the rooftop garden. This is where I found myself on Saturday.

As I gazed through the glass into the garden I had the feeling that I was in one of those modern zoos — the kind where you look through the glass at various habitats. It reminded me of the type of habitat display where monkeys or lions enjoy a fairly undisturbed recreation of their natural homes while we all peer in. This room at the SFMOMA that looks into the rooftop garden feels just like one of those spaces.

Would the SFMOMA be so daring as to let me curate this big window with the sort of signage that marks this as a habitat? The signage could explain the typical and varied species of museum visitors. For example, the exhibit would include the art student, the visiting mom from Kentucky, the Eurotourist, the all-in-black art aficionado, etc. I saw them all on Saturday.

Visitors to the rooftop garden might not even realize they are part of the art — especially if they bypassed this room on their way in. My intent would not be to mock visitors, but rather explore how the public interacting with and viewing art becomes part of the experience. There may be an occasional museum visitor put off by being put in a “zoo” but is this idea any more invasive than art installations that capture visitors with video cameras?

Conceptual art can be as simple as installing fictitious signage to an architectural feature. 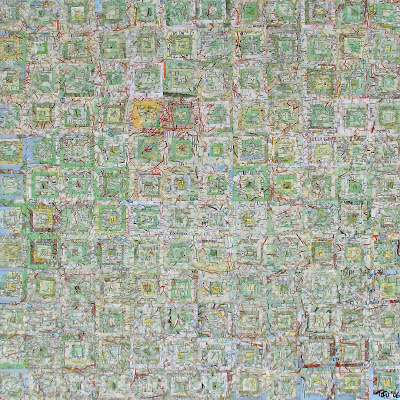 Now that the I am no longer making a piece of art every day for the 2011 Project, I am taking advantage of the time to clean, reorganize and get my studio in order. Every few years this needs to be done. I am uncovering all sorts of things, including art I did and I sort of forgot about. One such piece is this French Map from 2006.

I have friends who spend every summer in France with family. I miss them when they’re gone, but they come home with all sorts of good things at the end of every August. One year they brought back a huge stack of French road maps for me.

I imagined that my friends spent the summer going on evening walks in that little French town. They kept an eye out for unlocked cars. That autumn everyone in the town began to realize their maps were mysteriously missing from the glove box, yet nothing else was taken from their cars. It could lead to a winter filled with suspicion, gossip and speculation throughout the village. No one would have believed that the nice couple that lives in San Francisco swiped all the maps for an artist named Tofu. Well, it makes for a good story.

The result was a map of France made from France. I remember being disappointed with the results at the time. Now, that the piece has aged for over five years I am seeing it in a different light. I found it buried behind other work this week. I think I like this one. 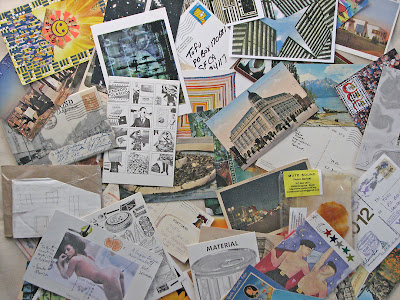 About six weeks I put out a call for postcards and announced that my first piece for 2012 would be made up of all the postcards I received by the end of the year. I have received a fantastic response — new cards, antique cards and a number of really creative ones from artists all around the world.
I have been finding some of the artists who sent me cards online. Here are some of the links:
I have been sorting through all the postcards and starting to think how I am going to incorporate them in a piece. I also have been reorganize my studio and am just about ready to get out the glue and put things under the knife. In the meantime, you can still send a postcard to:
PO Box 170681
San Francisco, CA 94117 USA.
Posted by Tofu at 3:41 PM No comments: 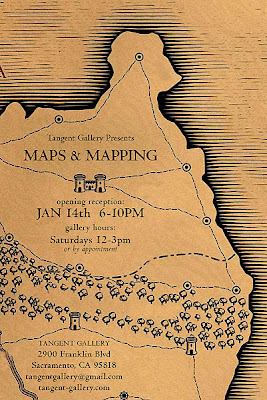 Some of my map pieces will be appearing in a show opening this weekend in Sacramento at Tangent Gallery.
Maps and Mapping
Tangent Gallery
2900 Franklin Boulevard
Sacramento, CA 95818
Opening Reception
Saturday, January 14th, 2012 6-10 p.m.
Gallery hours, Saturdays 12-3 or by appointment.
Five of my pieces have gone up for the show including a map collage inspired by Japanese textile patterns, my icon of the Virgen de Guadalupe made out of maps and a piece titled American Jesus Horse which is an image of a dinosaur made from maps of the bible belt. “Jesus Horse” is the term used for dinosaurs by anti-science, religious fanatics. 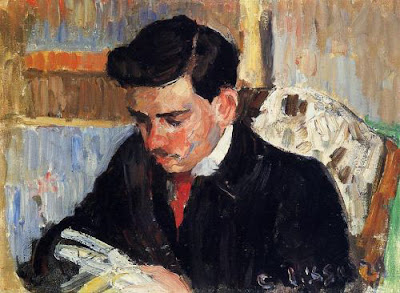 Having just seen the Legion of Honor’s exhibit Pissarro’s People one might assume my title of this post refers to a painting of one Camille Pissarro’s small children. Well close, the title refers to a small painting of one of his children. The show is a well curated, thorough retrospective focusing on Pissarro’s world through works depicting family, friends, colleagues and servants. But, the Little Pissarro I am referring to is the portrait of his son Rodo. His son was a young man of about 21 when this portrait was completed. The “little” refers to the rather small size of the painting, about 4” x 6”.

The show at the Legion of Honor is large, filling most of the special exhibit space with nearly 100 works of art. And the painting I lingered on the most, by far, was this little one titled Portrait of Rodo Pissarro Reading. At the end of the show I even avoided the exit through the gift shop in order to go get one more look.

I often find myself drawn to smaller works, particular of better-known artists. The Legion has quite a few little gems; there is van Gogh’s little Shelter on Montmarte and Daumier’s Un Wagon de Troisieme Classe both of which they keep on display upstairs. One of my favorite pieces in the entire building is a tiny Rembrandt etching titled Sleeping Puppy. It’s barely 1.5” x 3.5”.

As an artist there is something quite liberating about working small. Depending on one’s medium and style, particularly for painters, small pieces often can often indicate work that is completed relatively quickly. And for some artists, small works requiring less time are also a sign of a smaller commitment. That lack of artistic commitment can be quite liberating. A “quick” work on paper, board or small canvas has none of the weight that comes with a large-scale painting. Small allows an artist to be far more experimental. When an artistic experiment is small and requires a lesser investment of time, it can produce some impressive results. And when the experiments fail, as they sometimes do, the “wasted” effort is relatively small.

These rules for working small can apply to any artist. But, when you have the opportunity to see the small works of giants like Pissarro, it can be more informative than just seeing the larger works that appear in art books and on museum walls. When museums and exhibits include studies and smaller works as the Legion of Honor has done with Pissarro’s People they present an exhibit for the art lover and the artist. 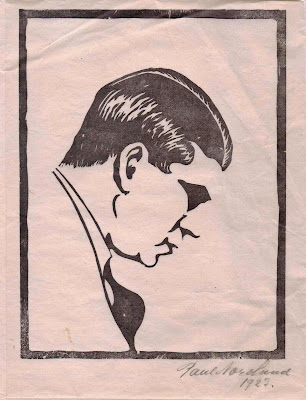 About 30 years ago I was with friends at a country auction in Sweden. One of the things they bought was a folio with four woodcuts on vellum. They were all similar to the one shown above. All four were portraits of well-dressed men in typical attire for the 1920’s. They gave me this one, which I misplaced years ago. It turned it up this week.

The artist was Paul Nordlund and is a bit of a mystery. He was active in the 1920’s and the only information I can find online was that he did woodcut, illustrations for some books at the time. The print I have is signed and dated in pencil. But considering the poor quality of the paper and lack of numbering, I am wondering if these were done solely for the purpose of being reproduced in print.

Another art mystery where I need more information…