Don’t ask me to explain it, but I find rust visually appealing.  Maybe it’s just the color or maybe it’s some sort of subconscious attraction to slow decay and the playing out of time.  There is something ghost-like about an object that is slowly rusting and decaying.  I photograph rust and those images find their way into my art.  The latest pieces of mail art incorporating rust have been sent off to Zona 598 in Montevideo and Atöly Arts-In in Istanbul for upcoming exhibits.

The coolest place in San Francisco on a Friday Night

Table by Lexa Walsh and Mutants by Annabel Blue Dudash and Elsa Rudolph.

I have to start with a confession.  Usually when something is being described as “cool,” I run the other way.  The really cool doesn’t need to be told.  And, if it is “a scene,” that scares me off even more.  Still, I will let you in on the coolest place to be in San Francisco on a Friday night.  It’s in Oakland.  Yes, you have to hop on BART and take a quick ride to the Lake Merritt Station.  You might even hear the music when you come up the stairs – a block away is the Oakland Museum of California.  Their Friday Night “scene” is the best and precisely because it’s a non-scene scene.  A friendly crowd spilling out onto 10th Street where there are food trucks if you’re hungry and, well, a great museum.

Most every major museum has one evening a week where they stay open late.  This is often the best time to go.  Admission is usually half-price, the museums are rarely over-crowded, and, when you wander away form the party, there is usually a calm energy in the rest of the building where you can enjoy the exhibits.  It’s like being at a big house party where you explore the house and find a quieter place to hang out with a few friends.  Even in San Francisco at the de Young, you can escape the fashionistas on a Friday evening and enjoy the museum in piece.  The LACMA on a Friday is something I try to do every time I visit Los Angeles.  One quiet Thursday I had a great time up in Boise, Idaho and felt I had the museum to myself.

Currently in Oakland there is some good work to check out.  The on going We Customize exhibit is bringing different artists into the museum every week.  Lexa Walsh’s sound table is a lot of fun (I want one of my own) and Annabel Blue Dudash and Elsa Rudolph’s mutants cracked me up (see images above).  And the “don’t miss” show right now is Beth Yarnelle Edward’s Suburban Dreams.  She has brilliantly captured a time and a place in Turn-of-the-Century Silicon Valley Suburbia.  Her photographs are stunning in the present.  I suspect that a century from now they will be recognized as very important historical and artistic works from the current period.  Go see them!

I've got an island in the Pacific 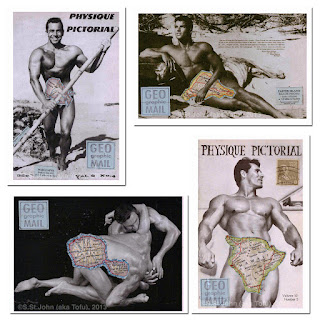 It’s time for the next installment in the Geo Graphic Mail series to head out to the post office.  This round incorporates postcards from the Athletic Model Guild and similar images from the 1950’s.  They have been “censored” with various Pacific Islands form a period, 1952, map of the Pacific Ocean from National Geographic.  As I was working on these I was reminded of July Holliday’s recoding of An Occasional Man which begins, “I've got an island in the Pacific…”  Additional cards from this series can be seen at tofuart.com. 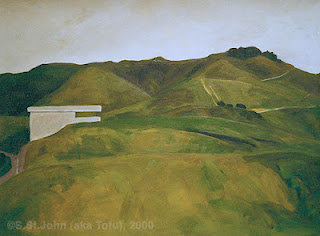 It’s President’s Day so let’s pay tribute to #13.  The very obscure, last Whig President, and mostly forgotten Millard Fillmore.   Historians have consistently ranked Fillmore near the bottom.  I don’t think he even turns up as a question on Jeopardy.  On a personal note, I was born in Millard Fillmore Hospital and live in a neighborhood that older residents still refer to as The Fillmore (as in Fillmore Street).

My praise of Millard Fillmore comes form his most inadvertent success.  As President it was Fillmore who admitted California to the Union in 1850.  It was the height of the Gold Rush when they brought early maps of the Bay Area into the Oval Office.  It was Fillmore and his staff that carved out huge tracts of land overlooking the Golden Gate and surrounding San Francisco Bay, all to deed them to the Department of Defense.  The goal in those days was to make sure the important harbor was protected.  Today you can see evidence of fortifications from the Civil War, to the Spanish-American War, both World Wars and beyond.  Fortunately for locals, those fortifications never saw any action.  What was wonderful is that all of that land escaped urban and suburban development for the next 150 years.  He didn’t know it at the time, but when Millard got out the map and his pencil he was preserving acres of open space that is not part of the Golden Gate National Recreation Area.

San Francisco is the world’s greatest city, in part to our backyard wilderness.  The northern and western waterfront are wrapped in national park and, just across the Golden Gate Bridge, we have the Marin Headlands.  How many cities offer a local bus where you can take a ride, get out, and see a mountain lion on the trail?  It’s an escape and, of course, a source of inspiration for my art.
Posted by Tofu at 6:30 AM No comments:

Variations on a barcode Op. 84 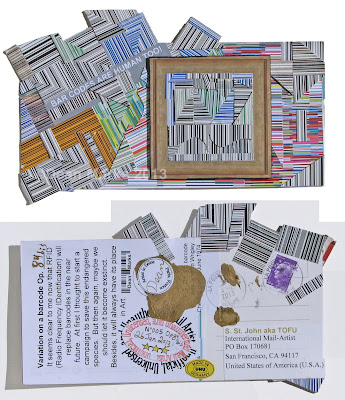 I receive some great artwork in the mail.  Yesterday something truly amazing was waiting for me in my PO Box.  Dean Marks sent me Variations on a barcode Op. 84 from France. First off, that it arrived without an envelope and made it in all it’s three-dimensional, non-standard size glory from France in under 10 days is an accomplishment in itself.  Like myself, Dean understands the need to preserve ephemera that may not be around much longer.   Particularly by incorporating it into art.  On the back of the card he states:

“It seems clear to me now that RFID (Radio Frequency Identification) will replace barcodes in the near future.  At first I thought to start a campaign to save this endangered species.  But then again, maybe we should let it become extinct.  Besides, it will always have its place in Art.”

And, most importantly of all, it just looks really, really cool!
Posted by Tofu at 1:42 PM No comments:

A Valentine from the archive 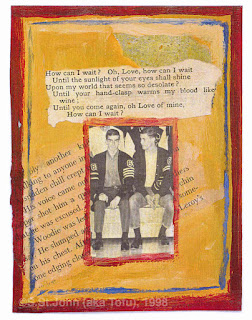 From my series of mixed media prints done in the late 1990’s.  I made heavy use of a 1968 yearbook from Southern California that I found at Alta’s wonderful thrift emporium in Joshua Tree, California.  I suppose these lettermen have no idea…. 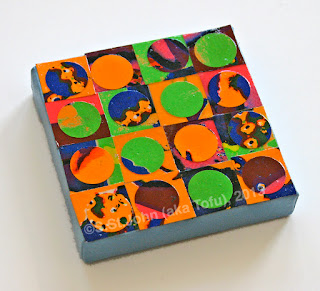 I am always pleased when a prototype turns out well.  Vintage, 1960’s, silk screen prints of Marilyn Monroe from an old magazine.  Recycled and repurposed.  Stay tuned for something bigger…. 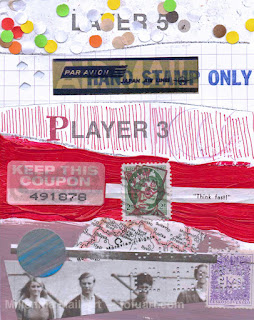 Number 36 is back for the Millennia Mal Art Project.

It’s a well-traveled piece that went from San Francisco to Québec to Germany and Argentina before making it back to San Francisco.  It includes contributions from Roland Hallbritter, Samuel Montalvetti and a few artists not yet identified.  Included with the piece of art from Samuel Montalvetti was a small hand made book made from an old envelope (see below).

The Eyes Looking Back at You 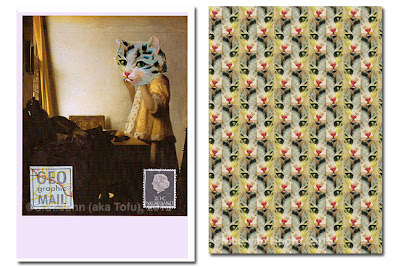 In December I sent out more pieces for the Geo Graphic Mail series.  This time it was some Dutch-themed treats, or Vermeerkats.  It was all these Vermeer postcards with cat and dog heads.  A few went to artists, appropriately, in the Netherlands.  Including the one shown above to Nico Van Hoorn.  It arrived, was scanned and posted and then the eyes were configured into a new card that was sent back to me.
Posted by Tofu at 5:21 PM No comments: