One of the roles an art museum can play is exposing the public to artists and work that they are unfamiliar with. The blockbuster shows with the big names we all recognize serve a different purpose. When the Picassos are packed up and take a trip around the world, it’s an opportunity for everyone who can’t make it to Paris to see famous works of art. At the same time, as an artist, I often find myself truly appreciating a museum when I get exposed to something completely new to me. Yesterday I went to the de Young and saw a show of work from the photographer Ralph Eugene Meatyard. It is a good example of why I visit museums.

Meatyard died young n 1972 and his work has remained somewhat obscure. The show at the de Young has over 50 photographs and is titled Dolls and Masks. He staged his photos. Many contain dolls and the models often wear masks. He usually used his wife and children as models for the masks. The photos are typically set in overgrown gardens and ramshackle, decaying buildings. If one was to classify his work, the term Southern Gothic immediately comes to mind. Some of the photos feel as if they are meant to illustrate the works of writers like Carson McCullers or James Purdy.

Dark images of broken dolls and rubber masks on children could be a recipe for a disturbing body of work. At first glance, the first word that comes to mind is creepy. But that reaction quickly evaporates as you look closer at the work. Perhaps because he worked with his own family, there is something innocent about Meatyard’s work. It’s hard for me to express why, but this work comes off as oddly pleasant. On the other hand, I can imagine if Meatyard’s contemporary Diane Arbus had come down to Kentucky. If she taken photos of the same subjects. I am certain I would have had that uncomfortable reaction I usually do to her work.

Even though I just discovered Meatyard yesterday, I keep going back to this photo I took a few years ago. It's of an abandoned doll down the street from my apartment. That day I may have been channeling. The Meatyard show runs until February 2012 and it’s one I need to see a few more times. 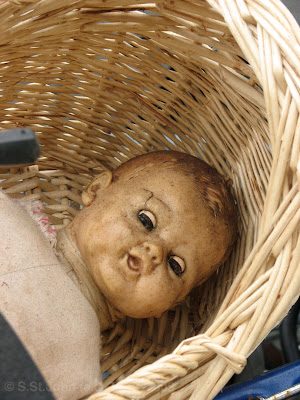 Finding The Art of Wayne Quinn 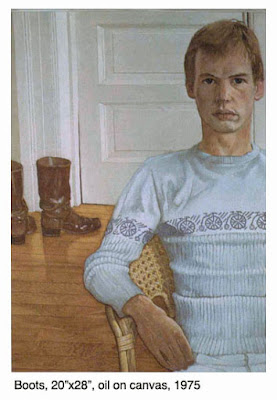 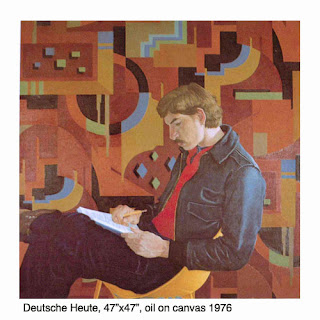 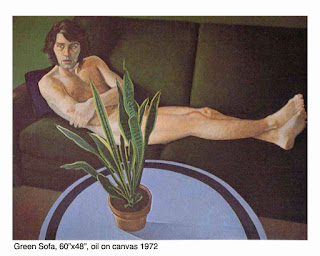 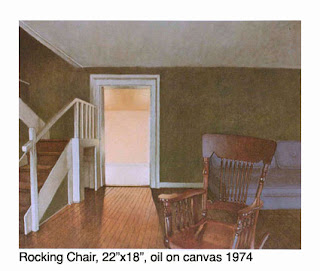 In September 2011 I went to the annual sale put on by the Friends of the San Francisco Public Library.  I usually avoid this, as some of the book buying and hoarding public can be pretty vicious.  Some volunteers advised to come on the last day when things would be more mellow.  They were correct, by Sunday everything was priced at one dollar and there were still plenty of books. There was a crowd, but in general it wasn’t too crazy.  And I did find some more atlases for further adventures in map art.

I think the real reason I was meant to go to the book sale was to find this one overlooked book titled The Art of Wayne Quinn.  The book was published in 1977.  It was from a San Francisco publisher house called New Glide Publications.  Online there is no reference to New Glide except in listings for books for sale – all published in the 1970’s.  Probably their most notable book was Word is Out, a companion book to the documentary of the same name.

The Art of Wayne Quinn has 95 pages of excerpts from the artist’s journal with color images of about 20 oil paintings, including detailed images.  Quinn was a realist. The clothing and hairstyles in some the portraits are clearly from the 1970’s though there is an out-of-time quality to much of his work.  Clearly ignoring many of his art contemporaries, Quinn worked in a style that seems more in place among America’s Regionalist Artists of the 1930’s.  It’s work that brings to mind such artists as Andrew Wyeth and Grant Wood.  One can imagine if Grant Wood had lived to a ripe old age and finally fled Iowa for San Francisco, these would have been the sort of paintings he would have been doing in the 1960’s and 1970’s.

Finding the book, made me curious to learn more about Wayne Quinn.  The book itself offered little biographical information other than that he was born in 1941 and raised in Upstate New York and had lived in San Francisco since 1963.  35 years after the book was published, the internet would provide me with some answers.  Wayne Quinn was nearly nowhere to be found except for this one brief blog posting.

Considering Wayne Quinn was nowhere to be found online, lived in San Francisco, and was born in 1941, I assumed the worst.  I found Quinn’s 1987 obituary from the Bay Area Reporter on the GLBT Historical Society’s database.  The obituary was brief with few details.  Two of his friends have recently added a few remembrances of Quinn.

All said there was not very much information out there.  If you come across this blog entry and have things to share about Wayne Quinn, please let me know.  The book was a real find, and I’d like the opportunity to preserve Wayne Quinn’s memory.  He is an artist who should not be forgotten.


Update June 2017:
Thank to a commenter on this post I discovered and just finished reading Mark Abramson’s book Sex, Drugs & Disco. In 2015 Abramson published his diary documenting his wild life in San Francisco during the late 1970s.   Mark was an admirer and eventually became friends with Wayne Quinn mentioning him a number of times in the diary.  He even refers to the Wayne Quinn book that started this blog post. Mark modeled for a nude sculpture Wayne did. There is also a 1979 photo of Mark at an opening of Wayne Quinn’s work at the Tyson Gallery in San Francisco.  He mentions meeting the collector who bought the sculpture and says:
“I could tell right away that he was disappointed to see me in the flesh.  He probably had fantasies about that body on the statue he bought, and I didn’t match them at all.  I wonder what he’ll do with it now.  It must have cost him a lot of money.  Sorry.”
I really want to see a photo of that sculpture, where is it now?
Mark mentions further modeling for Wayne Quinn.  The diary also mentions gallery shows in New York as well as Wayne’s work appearing in Architectural Digest in 1979 (I plan to peruse some back issues at the library). I am glad Sex, Drugs & Disco is out there, it’s a fascinating read, plus offers a few more, albeit brief, glimpses into Wayne Quinn’s life.

A reader named Alan shared an image of this Wayne Quinn painting he owns.  It is signed and dated 1965 and appears to be in its original frame.  This was likely a very personal work by the artist.  Alan told me that attached to the back of the painting is a small plastic bag with a lock of red hair.  Will we ever know the identity of this handsome red head?


Alan inherited the painting from a friend, who said told Alan had bought it at a sidewalk sale directly from the artist.  The idea that Wayne had needed to sell this work on the street just makes me terribly sad. 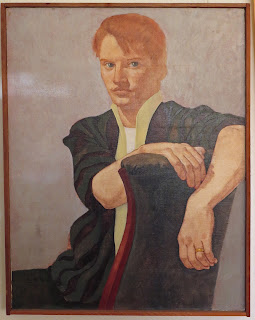 Update September 2019:
A new book titled Queer Holdings: A Survey of the Leslie-Lohman Museum Collection  is available from the University of Chicago Press.  The book features one image of a Wayne Quinn painting.  The book does not include any additional details about Quinn or his work.  The museum's database does not include any images or Quinn's work, including the one featured in the book as of September 2019.

Regarding Purchasing and Selling
I occasionally receive inquiries and comments about selling Wayne Quinn’s artwork.  I am not an art dealer nor an appraiser and have no thoughts on the monetary value of his work and venues where it would be appropriate to sell his work.  I recommend seeking a qualified art appraiser, perhaps through your local auction house.  If work you plan on selling ends up on an auction house website or in an online auction (e.g., eBay), feel free to email me the link via my website (tofuart.com) and I can post the link.  (Disclaimer: I take no responsibility for any information or claims made in any auction/sale link about Wayne Quinn's work).
Posted by Tofu at 6:17 PM 14 comments:

Don't Step on the Cracks 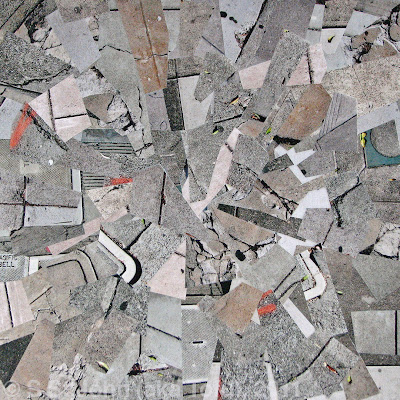 Superstition & Exquisite Corpse is the show I am in this month at the Tangent Gallery in Sacramento. I have the piece called "Don't Step on the Cracks" in the show. It's a 12"x12", mixed media photo collage (see above).

Tangent Gallery is at 2900 Franklin Blvd. in Sacramento. The opening reception is Saturday, October 8 from 6-10 p.m. The gallery is open Saturday's 12-3 (or by appointment).

This weekend is one of San Francisco’s better art weekends. It is time for the annual Alternative Press Expo (A.P.E) in San Francisco. A.P.E. gets bigger every year and might be reaching the point where it is too big. It’s filling most of the Course Exhibition Center now.

I found quite a few things that I like including some of the artists listed below:

A.P.E. is all weekend and if you haven’t had your fill of art, open studios begins this weekend as well. If you’re finding this blog after the fact, go to A.P.E.’s website and be sure to mark your calendar for 2012.