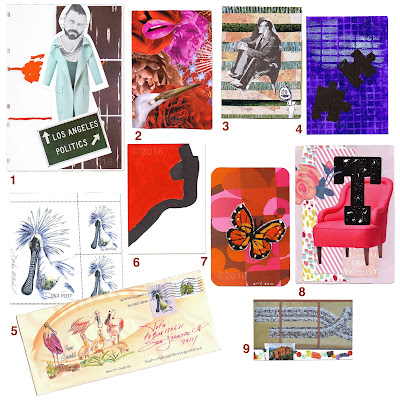 It is not only Pink Mail Art that has been landing in my post office box for the upcoming show, but I also have been received additional mail art, including some that does seem a bit pink-inspired.  Some of the recent arrivals include:

Thanks for all the great mail art.  I have to take a break for the next month or so with all the pink mail art arriving and for my dolo show of Time Travel Photo Collages opening on October 15.
Posted by Tofu at 12:08 PM No comments:

Civic Center — Back to Nature 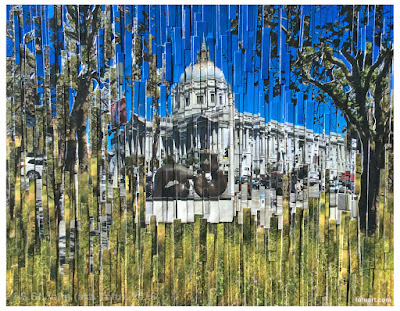 Grove Street
mixed media photo collage on board, 18”x14”
Imagining the busy corner of Grove and Van Ness a few hundred years ago.  Perhaps when there was still a grove of oak trees.  Long before our beautiful City Hall was built and before the Henry Moore sculpture was placed in front of Symphony Hall.  This Time Travel Photo captures the past and the present. It even features one of the Beaux Arts light poles that may no longer be part of the streetscape in the future (read about the controversy here).


This is the final piece from my new series of Time Travel Photos.  They will all be shown at San Francisco’s Glama-Rama Salon and Gallery.  The show runs from October 11 to November 27, 2016.  The opening reception is on the evening of Saturday, October 15 at 7:30 pm.
Posted by Tofu at 10:56 AM No comments:

A Busy Intersection: Past and Present 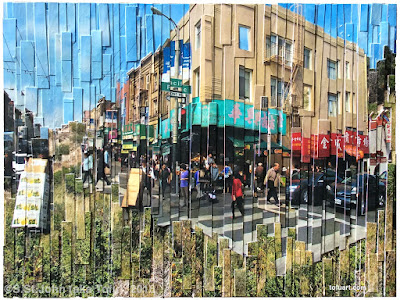 
This is the latest piece from my series of Time Travel Photos.  They will all be shown at San Francisco’s Glama-Rama Salon and Gallery.  The show runs from October 11 to November 27, 2016.  The opening reception is on the evening of Saturday, October 15 at 7:30 pm.
Posted by Tofu at 10:39 AM No comments: 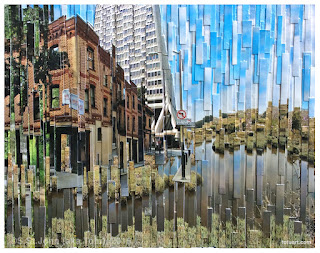 I still remember the first time I arrived in San Francisco.  Coming across the Bay Bridge and seeing the Transamerica Pyramid for the first time — at 11 years old, it made a big impression.  It is a 1970s skyscraper, that in the 21st Century, still feels modern and not all dated.  The Pyramid was built on the edge of the Financial District surrounded by historic buildings, some that even survived the 1906 Earthquake and Fire.  It is a unique neighborhood for San Francisco with many small quiet streets and alleys that are more typical in much older cities.  If it were 1848, the Pyramid would have sat just off the waters edge.  Eventually land was filled in and the waterfront is now five blocks to the east.  The neighborhood is built over the remains of ships that were abandoned by their crews in the rush to get to the gold fields.
At 11 years old, little did I imagine that, 16 years later, I would work in the shadow of the Pyramid.  One of the things that made my boring job bearable was not being stuck in some sterile office building.  I worked in buildings with some history and even a few ghosts.  Spending time down there, made me want to learn more about the City’s history.  Leidesdorff was an unusual name and I wondered whom that street was named for.  William Leidesdorff was a remarkable and quintessential San Franciscan.  He was a multi-ethnic, immigrant who was the citizen of three countries.  Leidesdorff was a successful entrepreneur who started the first regular steamboat service across the Bay, built the first hotel and operated a warehouse in a spot at the water’s edge that was to become Leidesdorff Street (more about Leidesdorff can be found here).
This layered Time Travel Photo illustrates the present and the natural past and also few layers in between.


The new series of Time Travel Photos will be presented in a new show at San Francisco’s Glama-Rama Salon and Gallery.  The show runs from October 11 to November 27, 2016.  Mark your calendar for the opening reception on the evening of Saturday, October 15 at 7:30 pm.
Posted by Tofu at 4:25 PM No comments: