A Fashion Treasure from the 1920’s 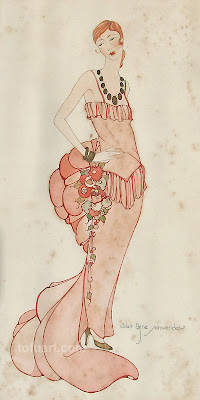 It’s time for another treasure that I have brought to the West Coast.  This is the type of thing my father paid a dollar or two for around 1970.  I remember it hanging on the wall back in our Victorian in Buffalo.  It moved with us to the house on Cape Cod.  There the elements were tough on it.  Even indoors, when you have an old house between a salt marsh and the beach, everything is damp.  Unfortunately this piece has some serious foxing issues.

It’s pencil and gouache on paper.  I suspect it may have been cut from a sketchbook.  The size is 7” wide x 14” high. Signed in pencil on the front.  There are framing instructions on the back in pencil in the artist’s hand.  Who was Violet Gene Schwender who signed this rather lovely fashion rendering from the 1920’s?

Sometimes a bit of internet searching makes one feel merely frustrated and teased.  I want to see more of her images like this one. I did learn that Violet Schwender was the artist’s maiden name.  Violet Gordon lived a long life, passing away in 2005 at the age of 1998.  To think, if I had looked into this a bit sooner, I could have asked the artist herself.

I learned she was well known in Buffalo as a local artist, but Violet Schwender Gordon was also a teacher of Fashion and Design in the New York State University system.  She even wrote the book (which I can find no record of online) that was used as the basis of the university system’s curriculum.  Somewhere, I hope there is an archive that has a treasure trove of more of her fashion renderings.  Maybe one day I’ll get o see it, and in the meantime I need to look into restoring this one.

On another note, a little bit more about the framing -

When I pulled apart the original frame I found that the only backing that was used was some cardboard from a product called Chase’s Domino Mints that promised:

Chase’s Domino Mints are Strictly Quality mints, and are in a class all by themselves—Not an ounce of glucose, starch or other adulterants used, thus leaving no unpleasant “after-taste.”  A few Chase’s Mints every day chases all indigestion away.

90 years ago it was candy that claimed to be medicinal.  Nowadays we have other medicinal sweets here in California.  It seems Chase’s is still business, but there is no mention of the mints on their website.
Posted by Tofu at 7:47 PM No comments:

Last night’s opening for Imaging Val Travel was a big success. The show is open Tuesday thru Sundays at Glama-Rama Salon and Gallery.  The show ends November 3, 2012.  Imagining Val Travel is a site-specific installation of mixed media art made from travel-related ephemera. The installation infuses the space with the soul of an imaginary, long lost travel agency.  Details at tofuart.com 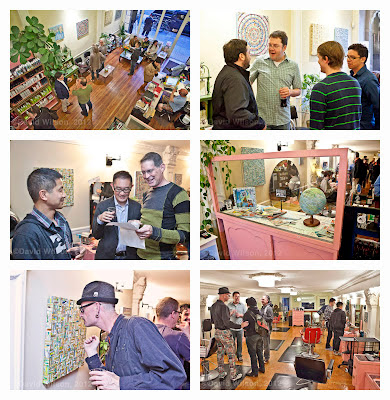 Photos courtesy of David Wilson
Posted by Tofu at 7:52 PM No comments:

Installed and Ready to Go 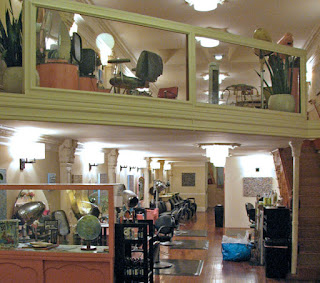 I am so used to seeing my art close up, in the cozy space of my apartment.  It’s such a different experience seeing it from across a big room.  Here’s what it looked like at 9:30 last night.  40+ pieces of art installed and now just waiting for you.

Imagining Val Travel
A site-specific installation of mixed media art made from travel-related ephemera.  The installation infuses the space with the soul of an imaginary, long lost travel agency. 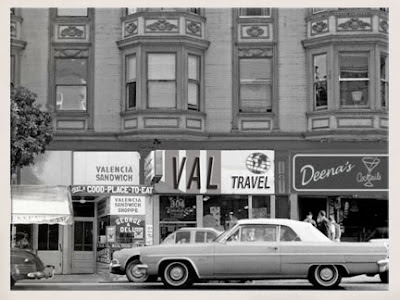 Below is the information and statement for my upcoming installation:

I have always been interested in history, from the big moments to the everyday.  I have a special fascination for San Francisco history.  I even like to look-up the history of spots in my neighborhood.  For a relatively young city, San Francisco has a rich, layered history.  It is also a city full of ghosts.  It made me wonder about the space at 304 Valencia.  What was there long before Glama-Rama?

Now, just imagine what it was like at 304 Valencia Street when they were renovating and moving into the new location for Glama-Rama.  Imagine a trip to a dusty, dark basement and finding a forgotten corner.  They might have discovered a box filled with discarded items from a long gone tenant.  Imagine Val Travel.

Ask yourself, could a former travel agency be haunted?  What sort of ghosts would be there?  I like to think it could be a place of pleasant and happy spirits.  The positive energy left behind would be from the years of customers coming by to plan and anticipate exciting adventures.  A salon and a travel agency have something in common.  They are both places that fulfill dreams and make our lives more glamorous. It’s no accident that Glama-Rama found a new home at 304 Valencia.

With this mind, I wanted to create a new series of travel themed, mixed media pieces using travel-related ephemera.  The installation at Glama-Rama Salon & Gallery is meant to infuse the space with the soul of an imaginary, long lost travel agency.  The work pays homage to all travel agencies because they have all but vanished from our urban landscapes.

I reuse and repurpose old bits of paper, everything from maps to postcards to stamps to photographs to magazines to various travel ephemera.  Recycling is only part of the agenda.  Even though I may destroy certain items to reuse them, there is a side of historic preservation with my work.  Rather than tucking something in a box or drawer, I prefer to permanently add it to a piece of art.  The work may have aesthetic value, but it also can serve as a time capsule by using items that would otherwise be lost or forgotten.  Many of the items I use are being rendered “obsolete” in our digital society.  Snapshots, postage stamps, tickets stubs are among things that are vanishing from our day-to-day lives.