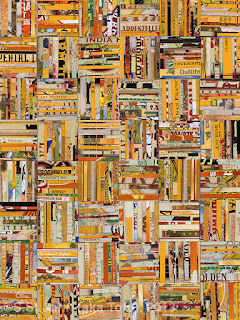 More repurposing and recycling of beeraphernalia (coasters, six pack cartons, etc.) it’s the latest piece in my series of beer-themed art for the upcoming show at San Francisco’s City Beer in October.  This one uses materials from Northern California and Switzerland.  Prints, phone and laptop cases, plus other goodies are available with this image from Society 6.
Posted by Tofu at 6:30 AM No comments:

From six-packs to art... 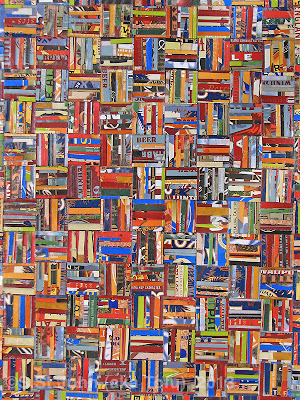 Mixed media work made from repurposed six-pack containers.  Part of a new series for a beer-themed show coming up in October. 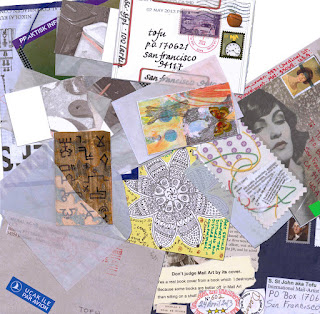 Last month I sent 100 recipients small pieces of art to be hidden away in books — more about the project here.  Now I am starting to get little pieces of art sent back to me.  Above are some of the examples.  Including work from Marina Salmaso in Denmark, Amy Irwen, Meral Agar in Turkey and anonymous piece of art made from a repurposed old book cover. Now, I need to start hiding these in my books.  As I have a large personal library, it should not be a problem. 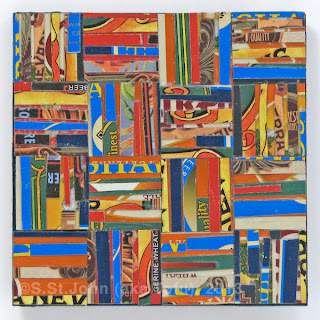 Busy cutting up the cardboard six-packs from different beers.  Getting out the glue and here it is, the first prototype for the Beer Show later this year.
Posted by Tofu at 11:51 AM No comments:

A little bit of hoarding — a lot of art

As individuals, there are the things we save for some reason or other.  My list of collectibles includes national park brochures.  The ones they hand out as you drive up to the gates and pay or show your parks pass.  Map, graphics, black bar with white lettering – any national park visitor knows what I mean.  I have a stack dating back 20 years.  And when I am planning a trip, I go through them and see which ones I need to take along.  But of course I always pick up fresh copies and have been known to grab an extra one or two at the visitor center as well.

I was drawn to park brochures long before I started repurposing them for art.  Aesthetically they are good examples of graphic design, informative and, well of course, they have maps.  I have always wondered why the Parks Service has never consolidated them into one book.  This is the national parks guide I want.

Below is a piece made from national park brochures. 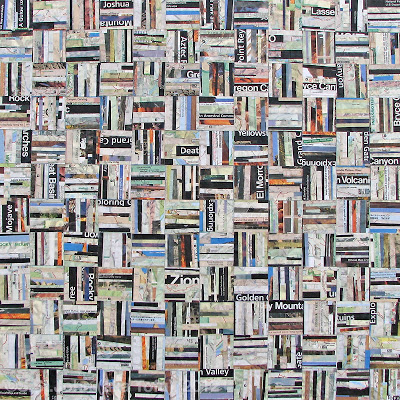 The original is still available as well as prints, cards, laptop and iPhone cases, etc. from Society 6.

What is a Major Museum?

I just saw my third excellent museum show this spring.  In March, I was down at the San Jose Museum of Art for the Eric Fischl show.  My most recent trip across the Bay took me to the Oakland Museum where I was overwhelmed by Hung Liu’s retrospective show Summoning Ghosts: The Art of Hung Liu.  And on Saturday, I was down in Pasadena at the Pasadena Museum of California Art for California Scene Paintings from 1930 to 1960.

I went into the Hung Liu show blind, knowing virtually nothing about the artist or her work.  This might be the best way to approach an artist that one is unfamiliar with.  When you “discover” and love the work, it makes it all the more exciting.  The exhibit site has background details and examples of her work.  More can be seen on Liu’s website.  The biggest surprise about the exhibit was that this outstanding, local artist was still unknown to me.  And while the San Francisco museums have all picked up her work for their collections, they certainly haven’t featured it and given Hung Liu the attention she deserves.  This might be a job for the Guerilla Girls.

As “old fashioned” as it might be too some, I love representational, pre-abstract, pre-WWII, American painting – Edward Hopper, Thomas Hart Benton, Grant Wood et al.    If all three of them had headed west and settled in California, they would probably be part of the current show of California Scene Paintings in Pasadena.  It is full of work by artists I need to become more familiar with, names like Phil Dike and Emil Kosa, Jr. along with another California favorite – Millard Sheets. What’s particularly special about this show is that most the works are borrowed from private collections. They rarely get seen by the general public.

The exhibit is more focused on Los Angeles and Southern California.  Many of the paintings have preserved rural scenes lost to suburban sprawl long ago.  There are also paintings of lost neighborhoods like Los Angeles’s Bunker Hill and Chavez Ravine — communities that were completely destroyed in the name of urban renewal and building freeways.  After seeing the show, driving down the Pasadena Freeway and coming to the interchange where The 5 and 110 meet, I was trying not to get too distracted imagining the hilltop neighborhood of Victorian homes that used to be in the same spot.

Seeing all three of these shows, reminds me of why I go to museums.  It’s all about exposing myself to work that influences me, often on a subconscious level, as well as my ongoing art education.  But I also can’t help noticing that I am seeing the best work in what many might dub small, or “second” or even “third tier” museums.  Few would call any of these three “major museums.”  But I have to begin to ask, just what makes a “major” museum?  Is it the hyped up blockbuster shows with high admission prices?  Is it sticking the Girl with a Pearl Earring’s mug on everything from a mug to shopping bag to a tie? We might need to revisit what really defines a “major” art museum.  Shouldn’t it be about the art instead of the hype?
Posted by Tofu at 3:02 PM No comments: