What would an artist buy at the gift shop?

Today is Van Gogh’s birthday. What would one get him at museum’s gift shop? Would he like the coffee mug with his mug? Would Vincent wear a self-portrait tie? Would a little bit of lunch get stuck in his beard and spot his tie? What would he think of the calendar? There was a recent episode of Dr. Who where The Doctor takes Van Gogh to the future. Van Gogh got to see his work in a London museum. It was cute. It would have been really clever if they had taken Van Gogh down to the gift shop.

Often opinions on museum gift shops can fall into two camps. There are those folks who one suspects really visit the museum mostly for the gift shop. Then there is the other side that just abhors the gift shop. The gift shop can be a good source of revenue for any museum. I generally don’t mind them. But what I do object to is the way they are spreading into exhibitions space. For example, The Legion of Honor has a perfectly adequate gift shop. A few years back, just around the corner, an entire exhibition room was also commandeered as a gift shop for their special shows. This is the point when I want to start decrying the moneychangers in the temple. I call it “gift shop creep” as additional gift shops start popping up and expanding out of their spaces.

There is one thing that I do recommend buying at museum gift shops — post cards.

I don’t have the means to buy every art book I want. Instead, I buy museum postcards of art I like. I get home and put them in a photo album. At this point, I have invested as much as one very expensive art book. The book of postcards has become a sort of art book of my personal favorites. And while I could also fill it with notes (I don’t), it acts as a journal of art that I have found interesting over the years.

And I do confess, after the traveling show has packed up, a few months later, I will pop into the shop and then buy the fridge magnets for cheap and even an occasional coffee mug. 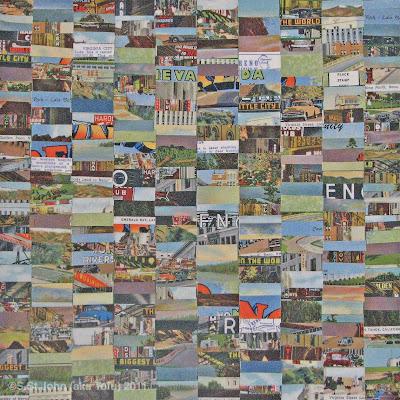 I have been working with postcards and postcard-inspired art for many years. I love using them in collages, I love sending postcards and I often create 4”x6” postcard size art. In 2009 I spent the summer making my own handmade postcard booklets. The work was inspired by vintage, souvenir postcard booklets. Each booklet I created, was made up of 12 individual small paintings, they were then assembled into handmade books.

The latest series includes doing to postcards what I usually do with maps — cutting them up and reconfiguring them. So far I have been using the older ones that are reproductions of paintings rather than photographs. The finished pieces retain a painterly look though they are collages. The piece shown is Reno Decosntrcuted (10"x10") A few more can be seen on website.

Have you recently received one of my postcards? If not, go my website and send me an email with your address and you’ll get a little treat in the mail.

This piece along with other deconstructed pieces is available for sale.

A Mixed Bag at Yerba Buena

When I have been asked to describe the art they show at Yerba Buena Center for the Arts, I consistently say, “It’s a mixed bag.” There have been some good things there and some that are really great. Nick Cave’s Soundsuits back in 2009 were spectacular. Probably the best art shown in the Bay Area that year. And then of course, the mixed bag always has a lot of work that leaves me to wonder (and we’ll leave it at that).

Last night I came up on the second floor at Yerba Buena. There is an exhibit of work by the artists Lauren DiCioccio. The first thing I saw was a row of plastic shopping bags hanging on a line up near the ceiling. I rolled my eyes. This is the sort of “art” that just makes me crazy. I get a little closer and realize the bags are actually not plastic. The bags are made from organza. All the imagery on the bags, text, logos, etc has been carefully embroidered. At that point I immediately appreciated the artistry, but still was not quite convinced. My initial reaction was that it was a lot of work to make something that, in its original form, was just plain ugly. But then I turned the corner and it all started to make sense.

Lauren DiCioccio has done some amazing work. Recreating everyday items like plastic bags, newspapers, water bottles and notebooks. She makes the items out of fabrics like organza, muslin and felt and then embroiders the imagery onto the pieces. She could be described as a realist working in fabric and thread instead of paint. Her timing is perfect. She is creating images of items that are on the verge of disappearing form our daily lives. As things like the plastic shopping bag and printed newspaper become things of the past, DiCioccio’s work will be an artistic record. In the future, her work will find a home in museums. Shown in the same rooms where we see those old fashioned, über-realistic paintings of dinner tables covered with a bounty of food. I know just where they’ll go in the de Young. 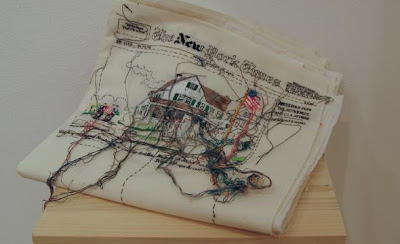 SFMOMA Artists Gallery: New Collages by TOFU in the Gallery