Henri Cartier-Bresson at the SF MoMA 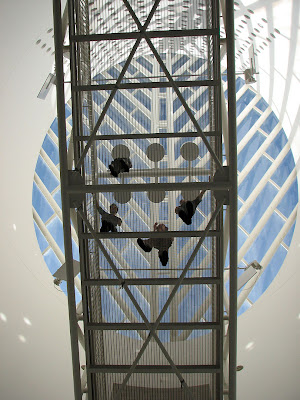 Today included a trip to the SF MoMA. It has been a while since I have visited, there are two shows that I recommend:

Photography is their strength in terms of both their permanent collection and the special exhibits they have. The Henri Cartier-Bresson show ends January 30. It’s worth the effort to make the trip to see this one. Some work is familiar but many pieces are seldom shown. The show is deservedly large, commanding an entire floor. It’s a thorough retrospective spanning his career with work from all over the world. So many of the photos are like archetypes for their countries that they border on stereotypes. The photo of Dutch housewives scrubbing their sidewalks is placed next to image of Italian boys playing cards in a stairwell. It can’t help but make you snicker. And some are hauntingly serious. Like the one of African-American sharecroppers forced to live in a tent city after being evicted for registering to vote. My reaction to the show made me feel like I was paging through an atlas — but an atlas without maps. Is such a thing possible?

It is also the museum’s 75th Anniversary. The second floor has been re-curated. It’s always good to shake things up. I am always surprised when works of art look new just because they have been moved. There are also some hidden treasures pulled out for the show including works by Richard Diebenkorn, Wayne Thiebaud and Clyfford Still.
Posted by Tofu at 7:16 PM