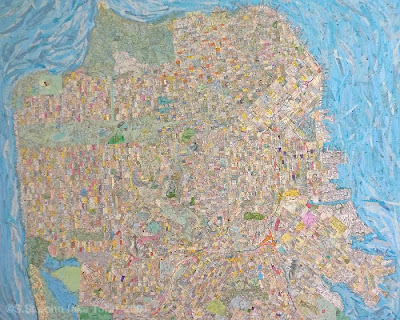 10 years ago this summer my living room was a mess. A large canvas (50”x40”) was on the easel. The floor was a sea of small bits of map. I was in the middle of creating a new map of San Francisco.

I had decided to render the City in a detailed map where each city block would be represented by a piece of map from someplace else. I wanted the piece to reflect the immigrant nature of our City. To that effect, certain places dominate various parts of the map. For example there are a lot of pieces of China in Chinatown, the Mission contains pieces of Latin America, Bayview has pieces of the U.S. South. True to San Francisco, there are pieces of all sorts of places throughout the map. There are also hidden little messages. For example, the block where the Transamerica Pyramid stands is represented by Cairo. And if you’re a serious history buff, you’ll know where to look for a piece of Sydney to represent the notorious Sydney Ducks.

In 2001, when I was in the middle of this piece, I realized that I never would have undertaken the task had I truly understood the amount of effort that would be involved. Often when I am the most pleased with my results, they are the pieces that that end up being far more involved and a greater challenge than I had anticipated.