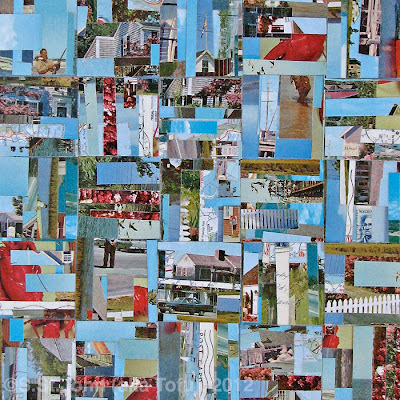 What can you do with a stack of vintage postcards from the 1960’s and 1970’s?  With a bit of Patti Page playing in your head, you start to cutting and gluing.  I realized that one of the postcards even had a long lost motel in East Sandwich where my family first rented a cottage in the 1970’s.  That was before we moved to Cape Cod.

The postcards I used are more than vintage, they also show something that is now all but lost.  The Cape Cod I remember had hundreds of small summer cottages.  Cottages covered with weathered cedar shingles.  There usually was a white picket fence overgrown with salt spray roses (Rosa rugosa).  The cottages were “quaint” and “rustic.”  They were filed with furniture that was often one step away from the dump.  There was no cable, no phones and no air conditioning.  When it was hot, you opened a window and hoped for a sea breeze.  And there was that smell of damp, the mix of humid summer air, a touch of mildew, and a bit of salt marsh.  Lift up the rag rug and you might disturb an earwig.  Today those cottages are mostly history.  Torn down to their foundations and converted into ordinary houses with little charm.  If the remodeled cottages are rented out to tourists, they come with all the comforts they now demand.  Cable, wifi and high thread count duvet covers in place of old chenille bedspreads.

If you want to have a little of Old Cape Cod you can get a print or even laptop cases or an iPhone cover from Society 6.  It’ll look swell with you madras plaid shorts. 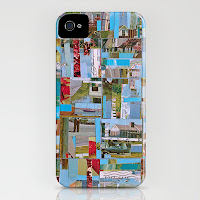