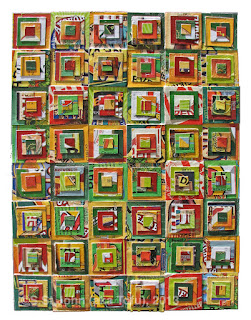 Here is my latest work in a series of beer-themed art as I continue to repurpose and recycle beeraphernalia. This one is made of 188 pieces assembled into a quilt-inspired pattern that I have been using for years.  This is one of the first times I have used this pattern with such brightly colored source material. The vivid colors contrast against each other and cause a bit of a 3D effect. Because I included cardboard cases and beer coasters, some of the pieces have different thicknesses.  This only adds to the 3D appearance.  Finally, I cut many of the original material at slight angles, and when I assembled the work, I was even surprised by the illusion of movement (which might not be as apparent in a digital image).

Brew 188 will be included in my upcoming show at San Francisco’s City Beer in October. The idea that it appears to be moving might be perfect for a venue where alcohol is served.
Posted by Tofu at 2:55 PM