Diebenkorn at the de Young 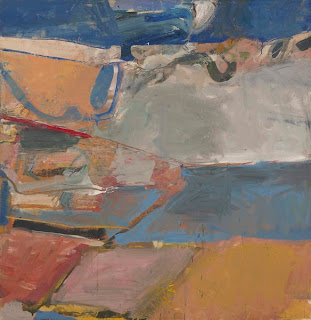 In recent years I have had little interest in the hyped-up, blockbuster shows at the de Young.  But finally they’ve hit a home run right out of the park.   Richard Diebenkorn – The Berkeley Years, 1953-1966 does everything a major museum show is supposed to do.  There are pieces familiar to de Young regulars and a few from other Bay Area Museums.  Bulking up the large show are plenty of rarely seen works from private collections as well as pieces from museums, big and small, around the country.  The de Young should be praised for the effort it took to bring in so many single pieces from different museums.  The show fills the museum’s entire lower level special exhibition space and overflows to the main floor as well.  I believe this might be the largest amount of space the de Young has ever devoted to a single artist – and deservedly so for a Bay Area giant like Diebenkorn.

The show is one that demands more than one look – it’s up until September 29, 2013.  And, as Scarlet Johansson never played Richard Diebenkorn in a movie, the crowds are manageable.  You can take in those big pieces from across the room without a mob in the way entranced by their audio tour.
Posted by Tofu at 7:33 PM