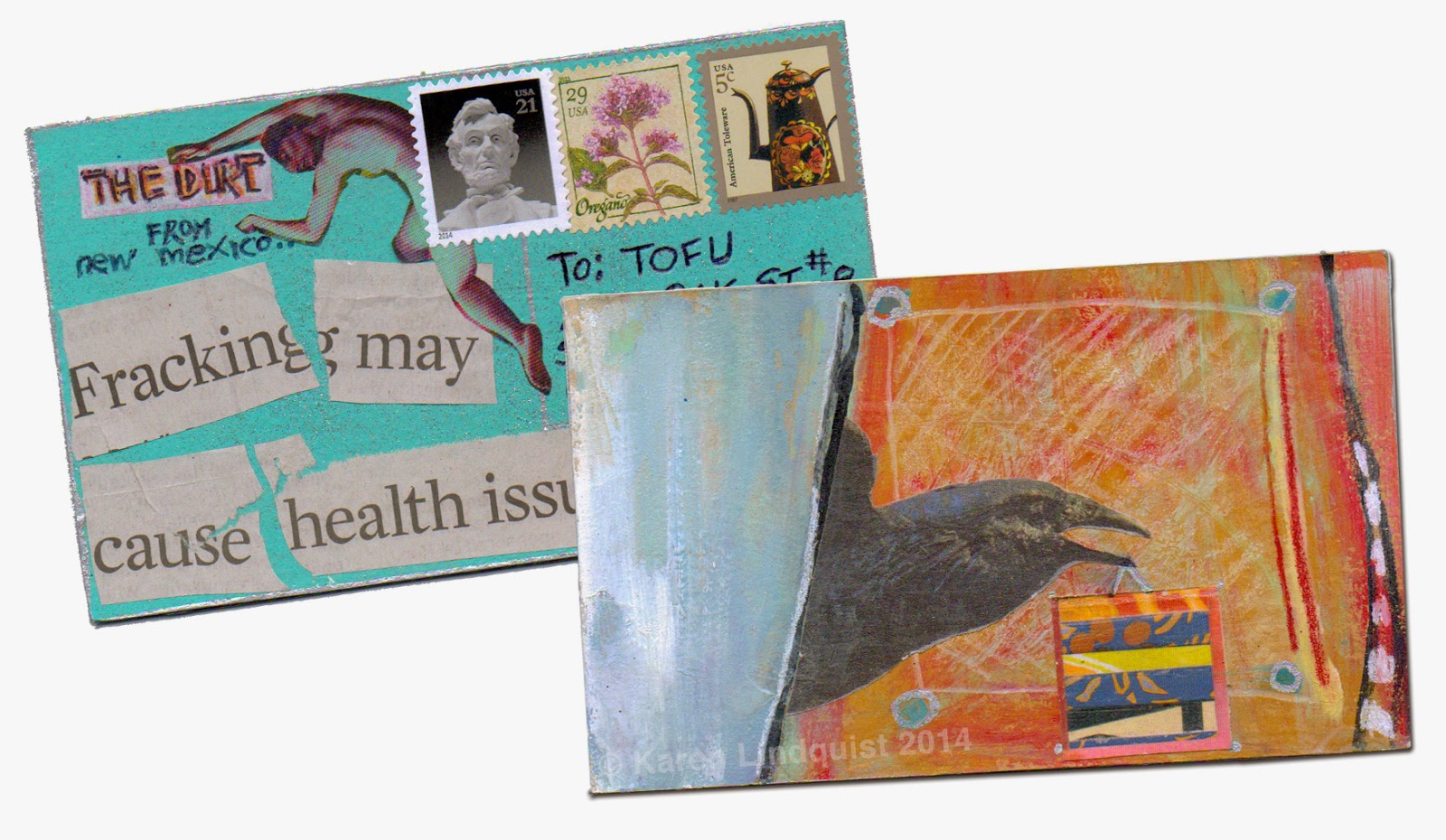 Karen Lindquist’s three pieces in the Collage meets Landscape exhibit are part of a new series called New Mexico Love Story. She describes the series as a visual homage to a magical state with an anti-hydraulic fracturing sub-text.  I visited the magical state, New Mexico, or, as I call it The Holy Land, earlier this month.  I spent a day with Karen in her home in rural New Mexico.  Getting a peek at her new work in progress and talking for hours.

Hydraulic fracturing, aka fracking, is threatening rural communities and wilderness in New Mexico and across America.  All in a race for short-term profits.  The long-term consequences out of this rush to bleed the land for every last bit fossil fuels are not completely known, but the potential for environmental disaster – unnecessary disaster – are staggering.

We spoke on the phone last week and were discussing ways to effectively respond to the fracking threat.  Karen is currently working on a series of handmade, original postcards (the one I received is shown above).  Many are being mailed out to elected officials.  Talking to her I realized what a brilliant idea this is.

Most politicians are unlikely to give a great deal of attention to email.  Especially those email templates from political websites.  Posting things on social media sites, e.g., Facebook, is pretty much like shaking your fist and yelling at a cloud.  Politicians only take notice of Twitter when, well you know, photos of their junk is involved.  Even sites like change.org are pointless.  Yes, it’s true, you might think your electronic activism is doing something, but it’s pretty much meaningless.  Elected officials still take note of constituent letters – original letters – not pre-printed petitions and postcards.

Imagine if we all started taking Karen Lindquist’s lead and started sending mail art about issues we cared about to our elected officials.  We may not sway opinions, but we won’t be completely ignored either.  At the least, the staff would take notice and you can bet your cards would be passed around the office.


So get making some art about what you care about, send it out!  And if you want to see more of Karen’s work, you need to go to see Collage meets Landscape before it closes this Sunday (September 28th).
Posted by Tofu at 12:34 PM